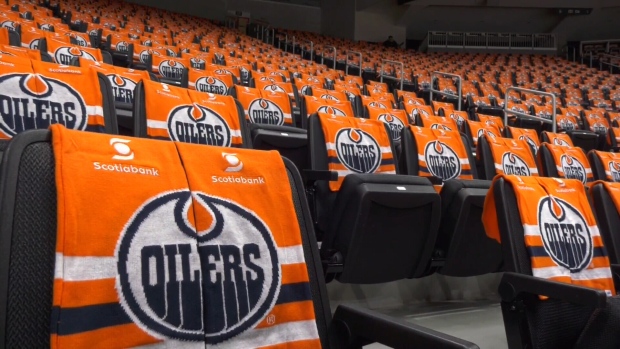 EDMONTON — The Edmonton Oilers have submitted a proposal to Alberta Health that, if approved, would allow fans to attend live games at Rogers Place.

An earlier statement from Shipton said the Oilers “have been in regular communication with Alberta Health on all aspects of our operation dating back to the start of the pandemic.”

Shipton said OEG has an ongoing dialogue with Alberta Health about bringing fans back to the Oilers home building.

“We believe we can host fans in Rogers Place and do it as safely as any venue in the world, based on our track record and expertise.

“We’ve also gained knowledge and best practices through conversations with many other venues that have opened to fans across the NHL and pro sports.”

The OEG spokesperson says the organization will only move forward with its proposal in conjunction with Alberta Health, “as they ultimately need to sign off on the plan.”

Sunday, TSN’s Tom Gazzola reported he had heard from “multiple sources” that OEG would be submitting a 50-page proposal to allow a limited number of fans to attend games.

Hearing from multiple sources that OEG is putting forth a 50-page proposal to AHS to allow a limited number of fans to attend games. The hope is to have people in the building as early as April – if & when the province is able to get to Step 3 of its plan to move forward.

According to Gazzola’s reporting, proper protocols would be followed. He added OEG is wanting to provide Alberta Health with a “testing ground” for fans returning to live events in the province.

Gazzola said if the OEG plan comes to fruition, front-line workers would be in attendance and honoured throughout the season.

Oilers captain Connor McDavid was asked about the idea during a Monday morning video conference.

“Just in talking to some of the guys around the league, you know they’ve gotten their fans back, even in a limited capacity, they talk about what a big lift it is,” the star forward said.

“We certainly miss our fans and that kind of energy they provide for us. If everyone deems it safe and there’s a way to work it out, I think that’d be great.”

So far no Canadian teams have allowed fans to attend their home games in person, but over the weekend the New York Rangers became the latest of a handful of NHL teams south of the border to reopen their gates to fans.

“You know it’d be nice to have some fans behind us, but I think we just gotta play a little bit better when we’re at home,” Oilers defenceman Josh Archibald said Sunday.

Nice for the players, but for the organization the motivation is driven by dollars and cents.

Back in January OEG CEO Bob Nicholson said they were waiting for the “right signals” from Alberta Health before they would proceed with allowing fans in Rogers Place.

He said the team was losing money without live fans and that at least 9,000 would be needed to attend each game in order to break even on operational costs.

Rogers Place has capacity for just over 18,000.

Indoor and outdoor sporting events are only permitted under Step 4 of Alberta’s reopening plan and that’s still at least six weeks away.

Shipton says the Oilers are not putting a timeline on their return of fans plan.

After Monday’s game against the Toronto Maple Leafs, the Oilers have 15 home games remaining in their regular season schedule, which ends in early May.