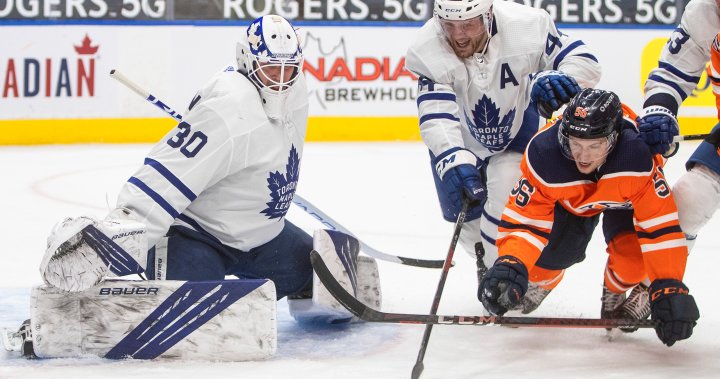 The Leafs also shut out the Oilers Saturday night.

“They took advantage of opportunities that they had, and we couldn’t do the same,” Oilers forward Ryan Nugent-Hopkins said after the game.

“We just couldn’t find a way to break through for that first (goal) tonight.”

Zach Hyman finished off a pretty passing play to give the Leafs the lead 7:19 into the game. William Nylander scored on a backhand three minutes later giving Toronto two goals on two shots. Leafs defenceman Morgan Rielly added a power play goal late in the frame.

“They’ve been playing a really good checking game — kind of staying on top of us — and capitalizing on when they had their opportunities,” Oilers defenceman Darnell Nurse said.

“They hopped out to the lead and they checked well and were in front of us all night.”

Mike Smith replaced Mikko Koskinen in goal for the Oilers at the start of the second period. Koskinen allowed three goals on 10 shots.

Edmonton forward Dominik Kahun had a chance in tight early in the second, but Hutchinson made a great save.

Smith came up with several big saves in the third, but the Oilers couldn’t break through at the other end.

“We know our game,” Nurse said. “We know if we keep getting pucks to the net and find a way to grind a little more o-zone time out, we’ll be able to get on the right side of this.”

“We dropped two that were important for sure, but we know we still have one more here in two nights and we’re looking forward to it.”

–With files from 630 CHED’s Brenden Escott