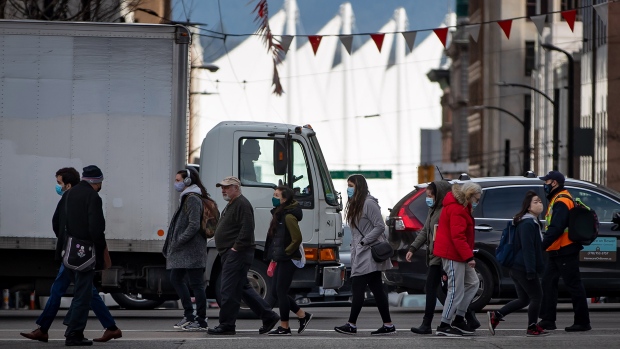 The Centres for Disease Control and Prevention said Monday that Americans who have waited two weeks since their second required shot can spend time with other immunized people indoors without masks or social distancing.

The same applies to gatherings by those at low-risk of severe disease, such as fully vaccinated grandparents visiting healthy grandchildren.

British Columbia Health Minister Adrian Dix said Monday that physical distancing and other public health guidelines will be around for some time.

He said about 15 per cent of B.C.’s eligible residents are expected to be immunized by the end of the month, which is “nothing like herd immunity.”

“The future is bright, but we can’t live the future right now. We’ve got to live the now right now.”

Dix does expect visiting restrictions to be loosened in B.C.’s long-term care homes this month as about 90 per cent of residents and staff have been vaccinated.

University of Alberta infectious diseases specialist Dr. Lynora Saxinger said evidence on which the U.S. health agency based its advice is “very much in evolution” and such recommendations might not work everywhere.

Virus variants with the potential to break through vaccine protection are also a “wild card,” she said.

But Saxinger said the principles underlying the U.S. guidance make sense, especially since the initial vaccine rollout has targeted older individuals, many of whom have been kept away from their grandchildren for almost a year.

“They’re basically taking a balance-of-probabilities approach to say that if you’ve received vaccine, you should be highly protected against severe disease. Therefore this should be hopefully OK.”

Ontario Health Minister Christine Elliott said her province is still recommending people take precautions with gatherings and will take its cues from the National Advisory Committee on Immunization.

Ontario reported 1,631 new cases in its latest update, but said the higher-than-expected count was due to a system “data catch-up.” The seven-day average for new cases was at 1,155.

There were also 10 more deaths linked to the novel coronavirus.

The province reported 278 new cases of COVID-19 and six additional deaths. Six cases of the more contagious variant were also detected, bringing that total to 659. There were 254 people in hospital.

And residents in five regions of Quebec, including the capital, were again able to eat in restaurants and work out in gyms.

Restrictions remain in place in the Montreal area due to fear that variant cases will cause a spike in infections and hospitalizations.

Quebec reported 579 new cases in its update. New daily infections had been above 700 for the five previous days. The province also recorded nine more deaths.

All of New Brunswick shifted to a lower pandemic response level Monday. That means a circle of 15 regular contacts can socialize, up from 10. The Atlantic province had five new cases and 36 active ones.

Saxinger said a “judicious and slow” reopening is the safest approach.

She noted that many countries have seen their case counts come down, but the proportion of more contagious variants is higher, planting the seeds for a spike.

“We know that it’s possible that the variants can be responsible for another surge, that a variant surge is harder to contain and you need longer and more stringent restrictions to contain them.”

Also Monday, Prime Minister Justin Trudeau announced that Thursday will be a “national day of observance” to commemorate the 22,000 people in Canada who have died from COVID-19 and to acknowledge all the ways the virus has changed our lives in the last year.

This report by The Canadian Press was first published March 8, 2021