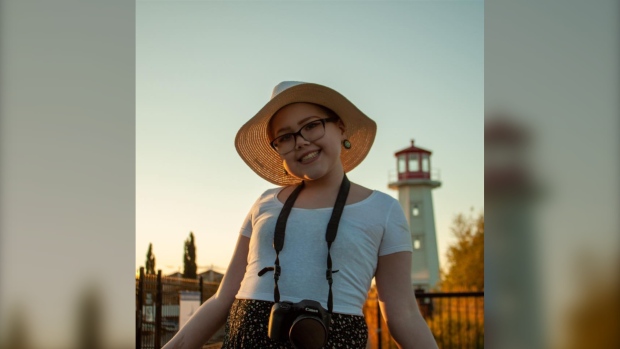 EDMONTON — Two and a half years after being diagnosed with a rare form of bone cancer, 12-year-old Justine Janvier died peacefully with her mother by her side.

“She was a beautiful soul, she loved to take care of people,” said Alana Janvier, Justine’s mom.

“She’s such a beautiful little girl and she’s so vivacious and just full of life, and always moving you know?” Layla Dumont, Justine’s aunt, remembered.

Alana had her daughter at 16 years old and raised her alone as a single mother. As a result, the two were inseparable, and Justine became her entire world.

In Aug. 2018, they received confirmation that Justine, who was only nine-years-old at the time, had been diagnosed with Osteosarcoma, a rare form of bone cancer.

“It started in her femur, in her upper knee,” Alana said.

Unfortunately, she relapsed, when an X-ray showed that the cancer had appeared in her right lung in October of 2019. As a result, Justine underwent more chemotherapy.

“She was just so strong, you would see her and you would never know what she was going through and what she was battling and how hard and long her journey was… just a little ray of light really,” said Dumont of Justine’s battle with the disease.

“She didn’t want anybody to see that she was hurting or in pain – she hid it all,” Alana added.

Justine was scheduled to have lung removal surgery in Jan., and prior to them flying out east, they had a CT scan done to make sure that the cancer wasn’t growing anywhere else.

However, three days before Christmas, they learned that it had spread to her left lung so the surgery was cancelled.

“She was just so tired, she didn’t want to do anymore chemo[therapy],” Alana said through tears. “We just spent as much time as possible with her.”

“She went peacefully… pain free and that’s all I wanted for her, was not to be in pain anymore.” said Alana.

Her mother said that although Justine battled with cancer for years, that’s not how she would have wanted to be remembered.

“She wanted to be remembered as being happy. She was a dancer. She loved gymnastics, she was so outgoing, and very competitive,” Alana recalled.

Justine’s aunt remembered her as being a fun, busy girl. “Always doing something, cartwheels, handstands, jumping jacks… she just loved life and was just so happy and she was so caring about everyone and strong – so strong,” Dumont said.

The family is now preparing for Justine’s funeral which is being held on Saturday, March 13. The family said that it will streamed live for anyone who wants to watch.

“It’s really open to anyone, anyone that wants to attend,” Dumont explained. “She really was so social, she loved everyone and you know, she would want it that way, for everyone to be able to come together and see her, and honour her life.”

A GoFundMe page has been started for Justine’s mother to help cover funeral expenses. Alana stayed home with Justine since the beginning of her diagnosis, and has been completely unemployed since Aug. 2020 so she could care for her daughter and spend as much as a possible with her.

“She deserves to go to the spirit world in the best way possible,” Alana said of her daughter.

“I think that’s the biggest thing right now is helping us honour all of her wishes and everything that she wanted and just being able to do that in the most beautiful way,” said Dumont.

Alana and Dumont said that their Indigenous culture and spirituality has been keeping them strong, adding that they believe that although Justine is gone from this realm that she’s not really gone. “She’s around and she’s with us every day and we’ve had so many signs you know, that she’s here. We’re just staying grounded in that,” said Dumont.

The link to the funeral will be posted on the Facebook page dedicated to Justine’s journey.

“That’s a pain that you can’t even imagine, having to bury your child, it’s not natural,” Dumont said regarding Alana.

“She’s handled it with such grace and such strength and is just trying to honour her beautiful baby, and she’s doing that every single day. I’m just so proud of her, and grateful that she allowed us to be such a big part of her life and to share in Justine’s beauty and strength and courage and resilience.”