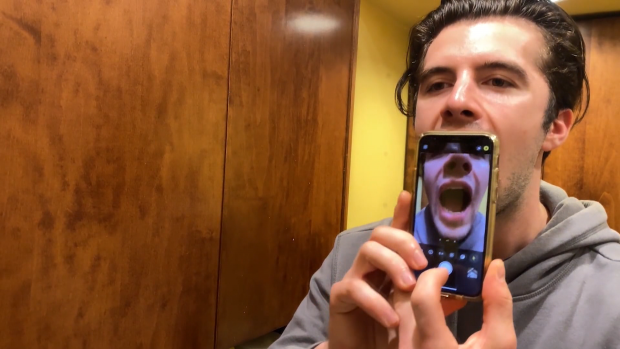 EDMONTON — Edmonton’s major junior hockey team is one of eight Western Hockey League (WHL) clubs taking part in a new trial to help with the early detection of the coronavirus.

Using an app, it asks users to fill out a survey and upload photos of the back of their throat. Once uploaded, a complex AI algorithm analyzes the photo for signs of COVID.

“The benefit of that is that you have an enormous footprint with smartphones,” said Light AI CEO and founder Peter Whitehead, “There’s about three billion in the world that you can drop this app onto and it takes about four seconds to diagnose.”

“Immediately as a team we jumped at the opportunity to be a part of this,” said Oil Kings head athletic therapist Brian Cheeseman. “Like everybody we’re hoping for some sort of return to normalcy here in the near future and hopefully being a part of a study like this can lead to the development of some kind of detection technology that will allow us to get back to normal as soon as possible.”

Cheeseman said the Oil Kings were approached by the WHL to take part in the study.

“So far we’ve managed to not have a positive COVID test.”

The team is now in its third week of the trial.

“It would be pretty interesting to see if this technology comes to fruition in the near future and we can say, ‘Hey, we were a part of that on the entry level.’ And we can say we played some small role in helping it turn into a success.”

“It’s really cool,” said Whitehead of the technology, “Itreally aids or contributestojust how powerful artificial intelligence really is. It sees a million things.”

The pilot project was brought in after the WHL signed an agreement with Light AI as part of its return-to-play protocols.