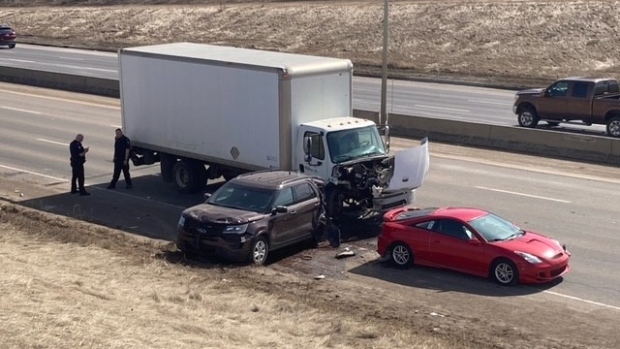 EDMONTON — An Edmonton police officer was injured after a cube van struck his vehicle during a traffic stop on Whitemud Drive.

Around 11:40 a.m. on the westbound lanes near 91 Street, a police officer was conducting a traffic stop when his parked SUV was hit by a cube van, according to police.

“(The officer) was walking in front of his EPS vehicle, when a cube van truck collided with his parked police cruiser, catapulting it forward and into the member,” EPS said in a news release.

After hitting the officer, the SUV then hit the vehicle that had been pulled over for the traffic stop.

EPS said the officer was treated on scene before being taken to hospital with minor injuries. No other injuries were reported.

The driver of the cube van stayed on scene and charges against them are pending.

Whitemud Drive westbound remains closed and police have not said when it would be reopened. Since 12:30 p.m., drivers were being diverted at 75 Street.