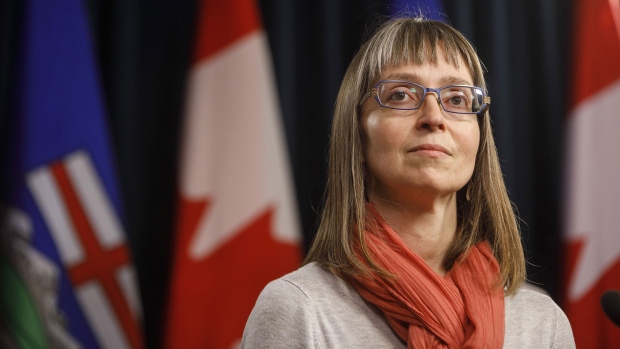 EDMONTON — Alberta’s chief medical officer of health and premier will take questions from reporters for the first time after the Easter weekend as the province’s COVID-19 situation continues to worsen.

Dr. Deena Hinshaw will be joined by Premier Jason Kenney and Health Minister Tyler Shandro at 4:30 p.m. Tuesday. You can watch their press conference live at CTVNewsEdmonton.ca.

The province is facing a number of worrying indicators amid an apparent third wave.

Alberta has seen a recent surge of cases, and has added more than 800 new infections every day since March 31.

Since the start of April, the province’s active case count has grown by more than 1,700. Meanwhile, its test positivity has exceeded eight per cent each of the last four days, including 9.89 per cent reported yesterday, the fourth-highest value to date.

A rapid growth in variant cases is behind both of those numbers. Variants of concern now represent just over 39 per cent of all active cases, up from 27 per cent last Monday.

Hospitalizations have remained above 300 six of the last seven days including the last four straight. The number of patients in intensive care units has grown more rapidly, up to 76 reported on Monday, nearly double the 40 reported three weeks prior.

More promisingly, the pace of deaths has slowed as vaccinations continue to ramp up. Alberta has now administered more than 700,000 doses of COVID-19 vaccine, including more than 116,000 second doses.

The province has now received a total of just over one million doses from manufacturers.