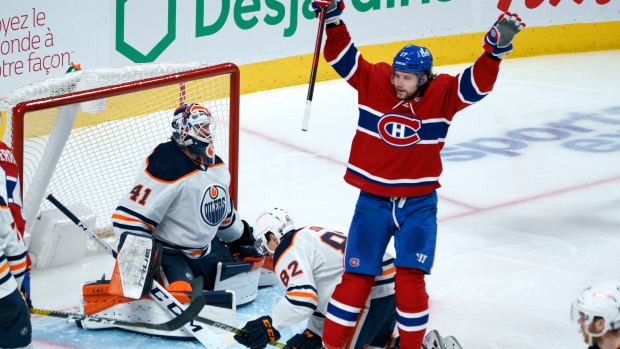 MONTREAL — Eric Staal, in his Montreal debut, scored the overtime winner as the Canadiens rallied from a 2-0 deficit to defeat the Edmonton Oilers 3-2 Monday.

Staal beat Mike Smith with a wrist shot from the face-off circle 4:02 into the extra period for the Hollywood ending that saw Montreal improve to 2-9 in overtime while Edmonton fell to 2-2.

Edmonton was outplayed early but led 1-0 after the first and 2-0 after the second. And Montreal could have been in a deeper hole had it not been for some highlight-reel saves by Carey Price.

Devin Shore and Darnell Nurse scored for Edmonton, which managed goals in the last minute of both the first and second periods.

Josh Anderson and Tomas Tatar scored for Montreal in its third-period comeback.

After some fine work along the boards, Corey Perry found Anderson parked at the crease 1:45 into the third period to get the Habs back in the game. It was Anderson’s 14th of the season

Tatar tied it up less than four minutes later, snapping a shot past Smith for his eighth after Paul Byron took advantage of an Edmonton giveaway.

The Canadiens lost inspirational forward Brendan Gallagher in the first period after being hit in the right hand by an Alexander Romanov shot while screening Smith. The 14-goal winger did not return.

Gallagher, who plays much bigger than his five-foot-nine frame, has a history of hand injuries, sidelined in the past after absorbing shots by Shea Weber and Johnny Boychuk.

Montreal held a 15-5 edge in shots after the first period, an advantage narrowed to 22-19 after the second. It was 29-22 for the Canadiens after regulation time.

The Oilers (23-14-2) were coming off a 3-2 win over Calgary on Friday. Their game Saturday against Vancouver was postponed due to the Canucks’ COVID-19 outbreak.

Montreal (17-9-9) saw its three-game win streak snapped in a 6-3 loss to visiting Ottawa on Saturday.

The Canadiens had won three of the four previous meetings with Edmonton this season, blanking the Oilers 4-0 last time out March 30 – a game that saw Edmonton record just 17 shots and Price earn career shutout No. 49.

Smith had the shutout Feb. 11 when Edmonton beat Montreal 3-0.

Staal played on a line with Jonathan Drouin and Tyler Toffoli. It was regular-season game No. 1,273 for the 36-year-old who came into the contest with 439 goals and 592 assists.

Montreal acquired the native of Thunder Bay, Ont, from Buffalo on March 26 in exchange for a third- and fifth-round pick in the 2021 draft. He had to undergo a one-week quarantine before suiting up for the Habs.

Smith was the busier goalie early, with the Canadiens holding a 12-1 edge in shots through the first 14 minutes. An unmarked Jesperi Kotkaniemi had a glorious chance in front of the Edmonton goal but fired the puck high.

Smith had to be sharp late in the period, stopping a Toffoli tip and then Drouin on the rebound.

But it was Edmonton that struck first through its fourth line and fifth shot, with 21 seconds remaining in the period. Jujhar Khaira rounded the goal, drawing the attention of three Canadiens on the wraparound attempt while Shore was left alone on the doorstep to stuff home the rebound for his third of the season.

Shore has scored five of his 42 career goals against the Habs.

Edmonton’s Jesse Puljujarvi beat Price early in the second but his shot rang off the goalpost. At the other end, Smith somehow managed to keep the puck out in a wild goalmouth scramble.

Price robbed Alex Chiasson from close range on an Oilers power play midway through the second period. Price did again on another Edmonton man-advantage late in the period, stopping Leon Draisaitl and then stacking both pads to deny Chiasson – on a great feed by Connor McDavid off the rebound – losing his face mask in the process.

But moments later, Nurse overpowered Price with a rocket from the point with 11 seconds remaining in the period and four seconds left on the power play. It was his 13th goal of the season, moving him past Arizona’s Jakob Chychrun (12) for the league lead among defencemen.

NOTES: With the addition of Eric Staal, Montreal becomes the fifth team in the modern era to dress six-plus Stanley Cup winners after having none the previous season (excluding expansion teams in their inaugural campaign). Staal, who won the Stanley Cup in 2006 with Carolina, joins Corey Perry (2007, Anaheim), Michael Frolik (2013, Chicago), Tyler Toffoli (2014, Los Angeles), Jake Allen and Joel Edmundson (both 2019, St. Louis) as new Habs who have won the Cup â€¦ Montreal visits Toronto on Wednesday. The Oilers play Wednesday and Friday at Ottawa.

This report by The Canadian Press was first published April 5, 2021