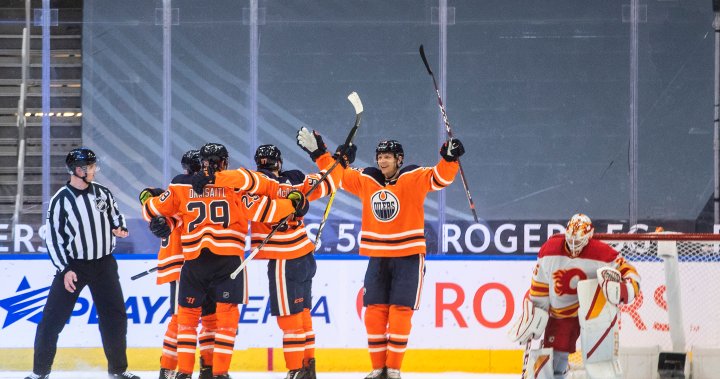 The Edmonton Oilers are unlikely to be major players prior to the NHL’s trade deadline on Monday, April 12.

That’s according to Oilers general manager Ken Holland, who appeared on 630 CHED’s Oilers Now with Bob Stauffer on Tuesday.

The Oilers are up against the salary cap and have also placed defencemen Oscar Klefbom and Slater Koekkoek on long-term injured (LTI) reserve. Any trade Holland could make would have to be dollar for dollar.

The Oilers are most in need of a top-six left-winger and third-line centre, and Holland indicated the Oilers simply won’t be willing to pay the price necessary to fill those holes.

“You’re talking about an upgrade,” he said. “Upgrades are players who are making money. Their cap number is not going to be $750,000 or $1 million. A good portion of the bottom of our roster makes around a million bucks.

“To try to upgrade and bring in one player who’s going to be better than those players, you have to factor in the assets and the cap space.”

The Oilers have two important players who will be unrestricted free agents in July. Could Ryan Nugent-Hopkins or Tyson Barrie be moved before Monday? Again, not likely.

“We’re trying to make the playoffs. We’re trying to go on a playoff run. To trade somebody that’s regular on our team to go get a draft pick and a prospect that might impact the team three, four, five years from now — I don’t see that happening.”

On the farm team in Bakersfield, Tyler Benson, Cooper Marody and Ryan McLeod are having excellent seasons. However, Holland doesn’t want to call them up and have them see limited ice time in the NHL when they can continue playing big minutes in the AHL.

“When you get down to the stretch run, I don’t know if the coach wants to experiment with young players on the power play and the penalty kill, especially when you factor in the players we’re putting on the power play. I think those young players are in a great spot. Let them continue to develop. Down the road, they’ll be here.”

The NHL trade deadline is at 1 p.m. MT on Monday. 630 CHED will have special coverage starting at 11 a.m.