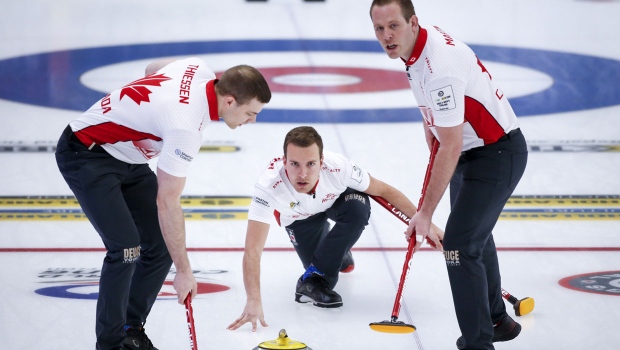 CALGARY — Coming off an upset loss and with a contender-heavy schedule on the horizon, Canada’s Brendan Bottcher was in desperate need of a solid victory on Tuesday afternoon.

His Edmonton-based team delivered with a 7-4 win over Italy’s Joel Retornaz to improve to 6-2 at the BKT Tires & OK Tire World Men’s Curling Championship.

Bottcher, who plays China’s Qiang Zou Tuesday evening, wanted to avoid a third loss with Russia, Sweden and Norway — the top three teams in the standings entering Draw 14 — on tap through Thursday.

“Everyone is really good and everyone loves to beat Canada,” Bottcher said of the round-robin. “So the best game they play all week is often against us. We knew that going in. Everyone told us that was the case.

“But now we’re experiencing it and we really have to play our A-game every game.”

The Italians put some early pressure on as Bottcher gave up a steal in the second end. His draw to the eight-foot ring was heavy in the third and he had to settle for a single.

Retornaz followed with a soft tap for a deuce but Bottcher answered with a strong hit-and-roll in the fifth end that set up a draw for two.

“We were able to claw back and gain a little bit of momentum with a good deuce in five and then come out and play a really good second half,” Bottcher said.

The game turned in the sixth end when Retornaz was drawing against three. His stone was light, giving Canada a steal and a 6-3 lead.

Canada ran Italy out of rocks in the 10th to win it.

“We’ve been really resilient this week,” Bottcher said. “It hasn’t been easy at times. We’ve had ups, we’ve had downs, we’ve been fighting the ice a little bit.

“There’s a lot that goes into a world championship and this is our first time here. We’re learning as we go a little bit.”

Entering the evening draw, Norway was in first place at 7-1 while Canada was in a four-way tie for second spot at 6-2 with Scotland, Sweden’s Niklas Edin and Russia’s Sergey Glukhov.

Switzerland and American John Shuster were next at 5-3 and Italy was in eighth place at 4-4. The top six teams will reach the playoffs.

The top two finishers in the 14-team round-robin earn byes to the semifinals on Saturday.

Teams sitting third through sixth in the standings will compete in qualification games with winners to reach the final four. Medal games are set for Sunday.

Edin beat Canada’s Kevin Koe in the 2019 world championship final in Lethbridge, Alta. The 2020 event was cancelled due to the pandemic.

The top six teams will also earn spots for their respective countries at the 2022 Winter Olympics in Beijing.

No spectators are allowed in the WinSport Arena, which was also the case at the recent Canadian men’s, women’s and mixed doubles championships.

Two Grand Slams are next on the bubble calendar before the world women’s playdowns in late April.

In the evening draw, Bottcher led China 4-2 as play continued in the 5th end.

This report by The Canadian Press was first published April 6, 2021.