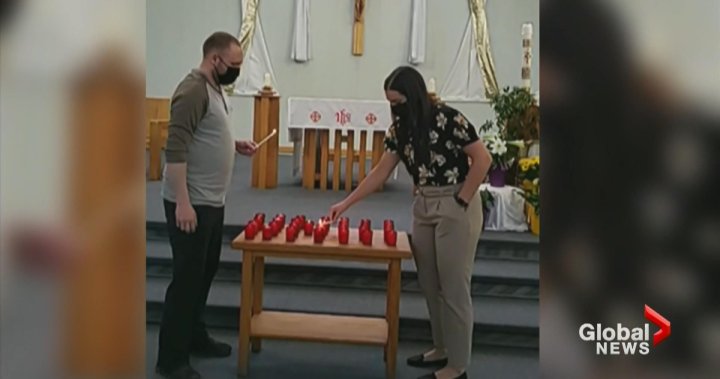 A church bell rang 29 times — once for each person who was killed or injured — at the end of an emotional virtual tribute marking the third anniversary of the Humboldt Broncos bus crash.

Due to the COVID-19 pandemic, the ceremony on Tuesday was held online from the St. Augustine Catholic Church in Humboldt, Sask., while hundreds of people watched.

Rob Muench was Humboldt’s mayor on April 6, 2018, when a semi-trailer truck ran a stop sign and drove into the path of the junior hockey team’s bus at a rural intersection near Tisdale, Sask.

Sixteen people died and 13 others were hurt.

Muench, wearing a Broncos jersey, told the service that an outpouring of support from across the country has helped those who are still suffering from the tragedy.

“These kind gestures have helped us all along the three-year journey to today. I would like to thank the parents, family members and surviving players that have meant positive changes that are happening in our country because of this tragedy,” said Muench, who is now the city’s deputy mayor.

“You are certainly making our world a better place.”

The church bell rang at 4:50 p.m. — the estimated time of the crash. It was followed by a moment of silence.

Twenty-nine candles were also lit in memory of those who died and to honour those who survived.

Humboldt’s current mayor, Michael Behiel, has called April 6 “2017-18 Humboldt Broncos Day” and said he would like to see it continued every year.

Prime Minister Justin Trudeau also addressed the anniversary during a briefing in Ottawa.

He said it is an “especially difficult day” for a lot of people.

“We remember 16 people taken from us much too soon. And as we do, we stand with the families, friends and teammates whose lives were changed forever. The people grieving across the country — we’re thinking of you,” Trudeau said.

“I can only imagine how hard it is for you not to gather on this day. And to everyone who continues to recover and rebuild, your strength is remarkable. Every day, all Canadians stand with you.”