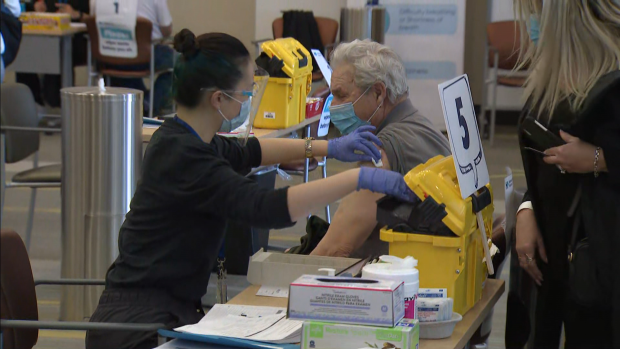 CALGARY — Albertans can expect to learn more about case numbers and vaccine rollout efforts during a scheduled briefing with provincial health authorities Thursday afternoon, one day after national and provincial leaders discussed the ongoing pandemic.

Among the covered topics was the toll the pandemic is taking on Canadians as case numbers rise across the country and some provinces reintroduce tougher restrictions.

Another issue discussed was border control as many premiers have asked for the country to increase international border restrictions to deal with travel-related spread of coronavirus, including new variants.

According to the Prime Minister’s Office, the meeting resulted in an agreement that now is not the time to adjust any measures at the border or to travel.

Speaking to the national vaccination effort, Trudeau says 10 million vaccine doses have been administered so far across the country Trudeau reiterated the AstraZeneca vaccine is considered safe and effective by federal health officials including Dr. Teresa Tam, the nation’s top doctor.

The leaders at the meeting are said to have agreed to a continued collaborative “Team Canada” approach to ending the pandemic.

Alberta reported 1,351 new cases on Wednesday, the largest single day case count in the province since Dec. 18, 2020. Alberta Health Services says the number of active cases in Alberta is 11,464.

Details regarding Thursday afternoon’s Government of Alberta announcement, including the time and participants, have not been released.