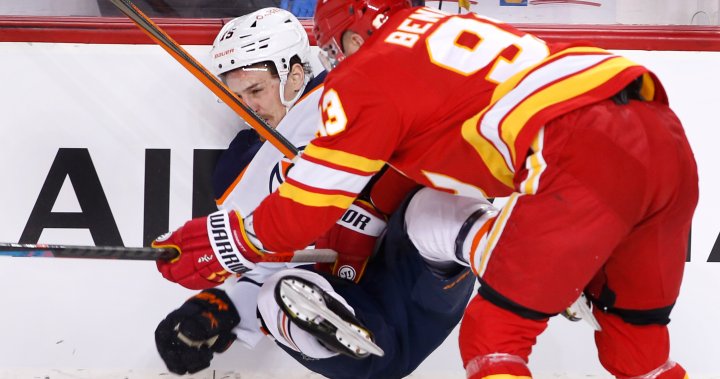 The Calgary Flames scored four goals in the second period on the way to a 5-0 win over the Edmonton Oilers Saturday night.

“It is what it is,” head coach Dave Tippett said after the game. “I was hoping we’d have some energy tonight, but it (the schedule) caught up with us. They had energy and we didn’t.”

Jacob Markstrom made 17 saves for his third shutout of the season.

Sean Monahan broke the ice just past the three minute mark of the second period, taking a pass from Andrew Mangiapane and zipping it past Mike Smith. Johnny Gaudreau scored from a sharp angle to make it 2-0, then Elias Lindholm scored on the power play. Mark Giordano added one more in the final minute of the frame.

Brett Ritchie made it 5-0 in the third, sneaking a backhand through Smith.

Ryan Nugent-Hopkins missed his second straight game with an upper body injury. It’s hoped he can return next weekend.

“Obviously the performance wasn’t there tonight,” Oilers captain Connor McDavid said. “But today is about Colby (Cave), and his memorial and the celebration of life; and I thought everyone did a great job.”

The NHL trade deadline is 1 p.m. on Monday. Bob Stauffer will host special coverage on 630 CHED starting at 11 a.m.

The Oilers, 25-15-2, will play in Vancouver on Friday. That game was moved forward from May 4 as the league is rearranging the schedule after the Canucks COVID outbreak.