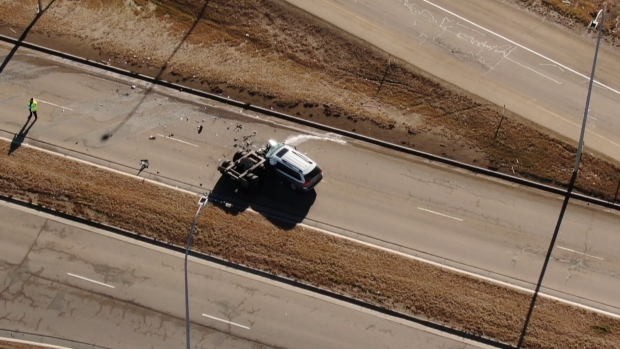 EDMONTON — A 66-year-old man and the driving company he worked for are facing four charges after a runaway wheel unit from his transport struck another vehicle on October 28, 2020.

A 36-year-old woman who was a local teacher was killed after her vehicle was struck by the runaway wheel unit from Hunt’s transport truck.

Police say an investigation determined that an eight-wheel converter dolly separated from Hunt’s tractor-trailer unit and struck the driver side of the other vehicle.

According to police, the semi-tractor unit was travelling westbound on Lessard Road when the dolly dislodged from Hunt’s truck, crossed the median through oncoming traffic, and ultimately collided with the van.

Hunt faces four traffic and vehicle safety offences including failure to prepare a trip inspection report, operating a commercial vehicle in a prohibited manner under the Traffic Safety Act, and for operating a heavy truck off truck route as defined in Edmonton bylaws.

Investigator also charged Rene Transport Limited, the trucking company Hunt worked for at the time of the incident with offences including trailer hitch latch mechanisms not securely latching and equipment safety system not maintained in good working order.