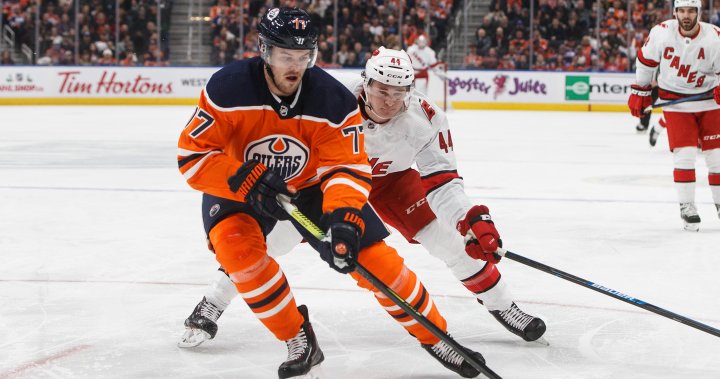 It’s been a month since Edmonton Oilers defenceman Oscar Klefbom had surgery in Cleveland on his injured left shoulder. A long rehab process lies ahead, and there’s no guarantee that the 27-year-old will play in the NHL again.

“That’s the thing. It’s tough to say. (The surgeon) says I might be able to play again, but there’s also going to be a risk,” Klefbom said Friday morning.

“We’re going to see where I’m at when the rehab time is coming to an end and it’s time to make a decision. He’s optimistic but he cannot really guarantee anything.”

The shoulder has been giving Klefbom problems ever since his draft year in 2011. He didn’t offer too many details about the surgery.

“It’s a big, serious surgery. We have to give it some time. For me to say I’m going to be ready in October or November or whatever, it’s impossible,” said Klefbom.

For now, Klefbom is in Edmonton and plans to return to Sweden in the near future.

“There’s not really a lot I can do. It’s going to take some time for the muscles to heal,” Klefbom said. “It’s going to be very boring not being around the guys while they’re in the playoffs.

“I’m going to go home for a bit then come back and see the doctors to check up on things. I’m going to do my best to be in the best shape I can be in the late summer.”

Read more: Edmonton Oilers rack up 4 goals in the third period to knock off Habs

It is possible that if Klefbom does resume his NHL career, it won’t be with the Oilers. He could be left unprotected in the July 21 expansion draft for the Seattle Kraken.

“I wouldn’t be shocked. I want to be here. My whole NHL career has been here in Edmonton. I love the city. I love the organization and the guys here. But it’s business,” Klefbom said.

At practice on Friday, new defenceman Dmitry Kulikov was paired with Adam Larsson.

Kulikov, acquired from New Jersey in a trade on April 12, should make his Oilers debut Monday in Winnipeg.

Read more: Edmonton Oilers with something to build on after win over Habs

Jujhar Khaira skated after being shaken up in Monday’s win over Montreal.

“He’s been cleared to skate but no contact. He did a little bit of practice. Then we scrimmaged a little bit that he didn’t take part in,” head coach Dave Tippett said.

Zack Kassian, who left the game favouring his left leg on Wednesday, was not on the ice.

“He was still was getting some tests done here today. It looks like he could be out a while,” Tippett said.

The Edmonton Oilers face the Jets next in Winnipeg on Monday night.