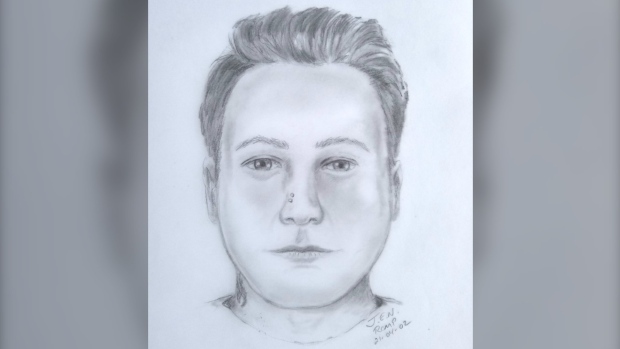 EDMONTON — A family in Warwick, Alta., continues to search for answers after a man assaulted a girl after attempting to gain access to their property nearly a month ago.

On March 26, RCMP responded to an assault outside a home during an attempted break-and-enter.

The mother of the 11-year-old who was assaulted and Erica Zacharuk, a close friend that lives nearby the family affected by the assault, were interviewed by CTV News Edmonton.

The mother of the girl said that her daughter was home with her grandmother on March 26.

The two noticed a pair of strange white dogs outside their house that they had observed on their property before.

A man was seen by the girl fumbling with the locked gate to the property.

The family says the girl exited her home to see what was going on as her grandma watched from afar.

“She said, ‘this is our yard and you can’t come in here,’” Zacharuk said. “He swiped at her and punched her in the throat.”

“My daughter then retaliated and hit him with a broom,” the mother added.

RCMP say the attacker then fled with the two white dogs in an older white Ford F150 truck that had grey spray paint on both the front and back.

“We are certain that the reason why he was here was to try and gain access to try and steal stuff,” Zacharuk said.

The mother of the girl who was attacked said the assaulter likely used the two white dogs to distract their own dogs from what was happening.

‘EVERYTHING CHANGED’: MOTHER OF THE ASSAULTED GIRL

The mother of the 11-year-old girl says in the month since the incident took place, “everything changed.”

Everyone in the hamlet in Warwick has been on the watch. According to Zacharuk and the mother of the affected daughter, the truck description matches one used in other thefts in the area.

Zacharuk said the community was shocked by the incident and now everyone is wondering if something like this could happen to them.

“There just that fear that what happened to a girl I am really close to could happen to mine,” she added.

The mother of the girl says that her daughter has been suffering with extreme anxiety now whenever she leaves her home.

“My daughter freezes up going into public areas,” the mother said. “She gets nervous.”

RCMP said the girl receive minor physical injuries as a result of the incident and that she receive medical attention at a hospital. The daughter’s mother told CTV News Edmonton that since the assault, her daughter has trouble seeing at times.

The entire family and their friends have become hyper-vigilant as result of the incident. Whenever vehicles pass-by their home or someone knocks on the door, everyone tenses up.

“As soon as a vehicle passes (I’m always) looking,” the mother said.

“You’re scared to leave the kids out in the yard where it used to not be a problem,” she added.

The only comfort for the family, the mother said, is that there are people sharing the composite sketch and on the lookout for the man who matches the physical description. She said hundreds of people have shared posts of composite sketch of the assaulter on Facebook.

“We need to keep it in the limelight,” Zacharuk said. “It’s not fair that this 11-year-old is afraid to go into your backyard because of some guy that decide to strike her.”

CTV News Edmonton reached out to RCMP who said the search for the assaulter is still “ongoing.”

They said several tips have been received and that Mounties are continuing their investigation of the incident.

RCMP ask anyone with information on the man identified in the composite sketch or about the assault to reach out to Crime Stoppers at 1-800-222-8477.