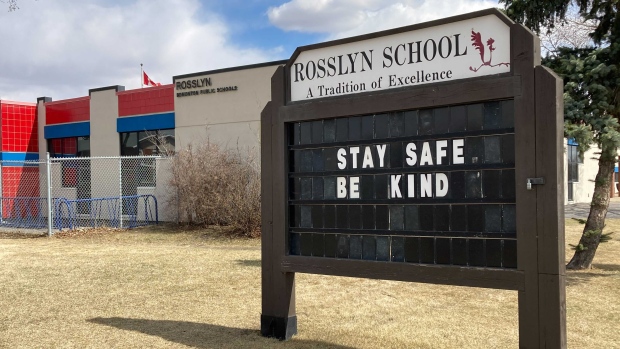 EDMONTON — WARNING: VIEWERS MAY FIND SOME CONTENT IN THIS STORY DISTURBING

Police are investigating after a 14-year-old Black student was attacked outside his school last week.

His family believes it was racially-motivated.

Pazo told CTV News Edmonton in an interview that the story of his assault begins prior to the incident.

In Nov. 2020, another student threatened him, Pazo says. The student was expelled from Rosslyn School. Later, his friends tried to retaliate against Pazo.

Last Friday, Pazo said he missed the bus. He decided to take an alternate bus and crossed the field near his school when he describes a “bunch” of boys running up to him.

“They start trying to wrestle me,” he shared. “They all start attacking me, and attacking me.”

That’s when the attack happened, documented in a 20-second video and shared on social media.

Pazo says he recognized some of the teens attacking him as fellow students from his school.

“They were saying the N-word and calling me monkey,” he added.

“After when it was over, they asked me if I was fine and then I told them, ‘of course I’m not fine, you just attacked me.’”

Pazo believes the group that attacked him were friends of the student who was expelled.

After the incident, he said the boys just went back to the playground and went on with their day.

“That made me afraid to wear my own skin,” Pazo said.

Pazo suffered a concussion and bruising throughout his body.

Edmonton Police Services (EPS) said in a statement that Pazo’s family went to the Northeast Division to report the incident that day.

EPS say they advised the family to take the teen to a hospital for treatment and call the complaint line so an officer could be dispatched.

“The EPS takes these incidents seriously and recognize the impact such incidents can have on the entire community,” EPS said in a statement.

Pazo’s family say they called the number and an officer arrived at their home.

Pazo alleges an EPS officer tried to get him to admit that he instigated the assault.

“When I said, ‘no I did not instigate the fight,’ he got angry,” Pazo said.

“He told me, ‘your mom is not here, you can tell me if you started or wanted to fight.’ Then I told him, ‘why would I want to fight seven people?’”

Pazo’s mother, Juluane, said in an interview that she wants a full investigation into the incident.

Andrew Parker, co-founder of the Black Teachers Association of Alberta and an Edmonton teacher, says he was contacted by a concerned community member after the assault took place.

He’s spoken with many community members and Pazo’s mother.

After hearing that the family wanted to pursue justice for the incident, Parker said the association and the Black community in Edmonton mobilized to ensure the family received answers.

“We want this to be called what it is: this is a jumping of a Black boy based on his race,” Parker said. “We are hoping that people in law enforcement, as well as in education, will address this effectively.”

“If they do not address this effectively, the community is ready to mobilize and to move forward with our own plan of action.”

Parker said this incident is an opportunity for Edmonton police to set the standard for law enforcement for how to deal with racial incidents like this.

“Enough is enough,” Parker said. “We’d like some effective change.”

“I think the best thing you can do, and numerous psychologists or physiatrists would say it, is to name it and to claim it,” he added. “Call it what it is and let’s create some strategies to address it.”

He would like to see anti-racism education that is age-appropriate added at all levels of the education system.

The Edmonton Public Schools Superintendent confirmed the assault involved students from their division and youth not in their division.

“I remain deeply unsettled about what happened,” Superintendent Darrel Robertson said in the statement.

“Violent incidents like this are not a reflection of who we are and what we stand for and will not be tolerated,” he added. “At the heart of who we are is a desire for our students to feel safe and welcome.”

Robertson said the division is undergoing a full investigation into the assault and that they will co-operate with EPS.

He added that due to privacy laws the district cannot identify information about who was involved or any consequences they face.

“We continue to address their actions and work to repair the harm,” Robertson said. “The division recognizes the seriousness of this incident and will hold all students involved accountable.”