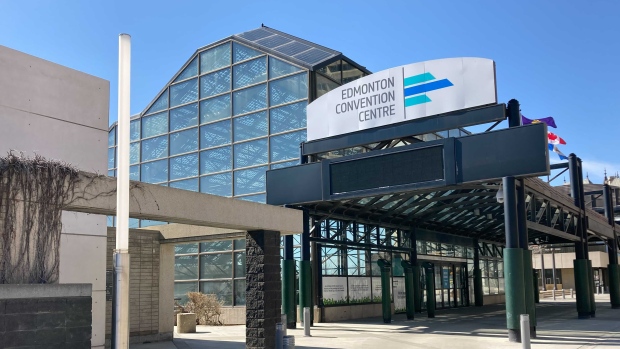 EDMONTON — Councillor visits to the temporary shelter at Edmonton Convention Centre have sparked a conversation of sorts about how council should monitor city-funded projects.

In a letter on Monday, the Edmonton Police Association’s president said Mayor Don Iveson was “political pandering” in alleging the visits to Tipinawâw Shelter were surprise inspections meant to undermine the work being done there.

Iveson wrote to the Edmonton Police Commission on April 16 after learning the police service had invited some councillors for an “unannounced walk through” for a look at the shelter’s “true conditions.”

According to one councillor, three of her colleagues conducted a drop-in tour, escorted by police, and the Edmonton Police Service confirmed to CTV News there were three tours with councillors.

Tours of the $11-million shelter service are typically arranged through the agencies that run it.

“There is nothing to be gained in terms of knowledge by surprising agency workers who are doing their very best under extremely difficult and high-stress conditions,” Iveson wrote, continuing to say the invite seemed to imply agency workers were contributing to existing issues and unscheduled tours may intimidate those sheltering there.

The EPA’s Sgt. Mike Elliott called Iveson’s comments inaccurate and hypocritical given the mayor twice toured the facility with permission, and called on Iveson to focus on the shelter’s community impact.

‘LEARN FIRST HAND WHAT IS WORKING, WHAT IS NOT WORKING’: UNION PRESIDENT

According to Elliott, between November when it opened and February, the shelter’s crime rate has been double the city’s average, varying from assaults, to intoxication, to executed warrants.

When Edmonton Police Service began stationing an officer at the convention centre 24/7, Elliott claims the calls to police stopped.

“Visits to the shelters by city councillors, health inspectors, social services, and EPS members provide opportunities to learn first hand what is working, what is not working and where things can be improved.”

It’s a sentiment at least one councillor agrees with. Ward 5’s Sarah Hamilton wrote her own letter in response to Iveson’s, also signed by Ward 9 Coun. Tim Cartmell, proposing the breach in protocol by EPS personally inviting councillors is as frustrating as the lack of information she has received as a council member about Tipinawâw’s operation.

Hamilton was denied a tour of the shelter in December because of a COVID-19 outbreak. It will close at the end of April without Hamilton ever having been inside, seeing as she declined EPS’ invite.

“A not insignificant amount of money was approved by council for the operators of this shelter, and I supported that… Having eyes on what’s happening and making sure not just the people who are residing there temporarily are safe, but the people that are supporting them are safe – that’s part of our duty as city council,” she told CTV News Edmonton.

Since opening in November, nearly 5,300 people have received some type of support at Tipinawâw, whether it be some of 183,000 meals served, or more than 200 connections to housing programs.

The Bissell Centre, and the other agencies who signed the letter, encouraged Edmonton councillors on Friday to see the data as encouraging, rather than focusing on any problems.

But Hamilton says the information formally presented to council doesn’t align with what she’s heard from others who have seen the space.

“I think it’s important that council, whatever we fund, council has to have eyes into the safety and security of those operations.”

She asked: “But if council continues to sort of have a barrier, I think it obviously puts us in a really difficult position. How do you continue to support a vision of creating that safe city for everyone and housing people if there’s an essential barrier to understanding how it’s working? Or if it’s working?”

Iveson heard of the police invites from Tipinawâw staff before councillors contacted him questioning their appropriateness.

As of noon Monday, the mayor had not read Elliott’s critical letter but said he stood by his concerns “on behalf of agency workers, on behalf of vulnerable people at the shelters, and out of concern for the need to maintain independence for police from politics and from politicians.”

He and the police commission are due for a meeting later in the week.

Both Elliott and Hamilton have demanded an apology from him.

“I think it’s one thing to express concerns and those are valid. I think it’s another to do so in a manner that calls into question the integrity of your colleagues,” Hamilton said of Iveson’s decision to write the police commission, rather than address his concern with councillors.

“We still have five or six months of governing left, and for a mayor that’s done a lot for the city, that would be a pretty sad place to leave his relationship with his council. In a place of mistrust.”