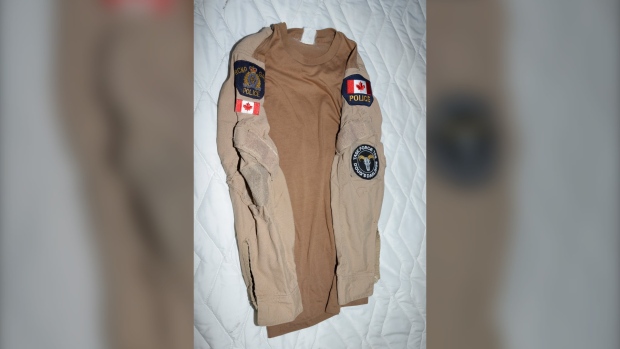 EDMONTON — Parkland County residents are concerned a day after a neighbour was charged with several firearm offences and accused of making threats against infrastructure and the public.

Kelvin Maure is facing a total of 34 charges, including impersonating a police officer and being in possession of an explosive substance.

“Maure is alleged to have made several online posts with comments and photographs deemed to be a threat to critical infrastructure, the police and the public. These online activities together with other actions taken by Maure resulted in RCMP taking him into custody.”

He was arrested in mid-February after a multi-day operation outside a residence in the area of Township Road 540 and Range Road 20. Police executed search warrants at multiple properties and found firearms, including an AK-47, explosives and an RCMP shirt.

“It’s very concerning. I don’t know what changed him or if he always grew up having those views, but it’s definitely concerning, having a young family, working out of town,” said neighbour Jack Sully.

“It is easier knowing that he has been caught, apprehended and charges are being filed.”

RCMP Insp. Scott Isaac told CTV News Edmonton some of the guns had been modified to fire automatically and have a higher magazine capacity.

But what stood out to terrorism expert John McCoy was the explosive substance RCMP found, which CTV News confirmed to be triacetone triperoxide.

“This is a form of explosive that is the go to for terrorist attacks in the western world going back to the 2005 London underground bombing, more recently Paris attacks in 2015, the Manchester concert all involved that explosive,” McCoy said.

Maure is in custody and is scheduled to appear in court on May 12.

With files from Chelan Skulski, David Ewasuk and Carlyle Fiset