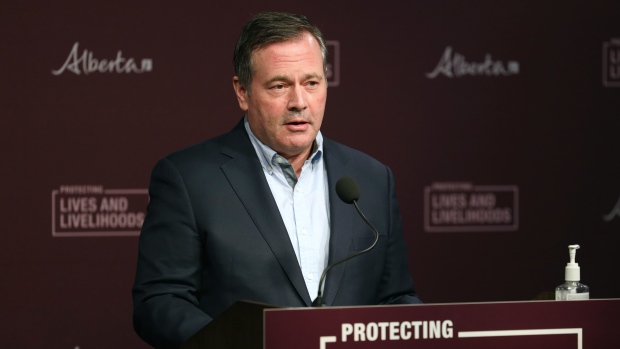 EDMONTON — The leadership of Alberta’s COVID-19 “hot spot” towns say they aren’t asking for a curfew – at least not yet.

The province announced Thursday municipalities whose case rates exceed 1,000 per 100,000 people could impose a curfew.

In a statement to The Canadian Press, the Regional Municipality of Wood Buffalo – where there are 1,537 cases per 100,000 – said it was not asking for a curfew yet.

“We are in the process of reviewing the newly announced restrictions, evaluating options, and awaiting further details from the Government of Alberta,” it said.

Banff’s local government took a similar position, adding it needed more details. The world-famous mountain tourist town has a case rate of 1,115 per 100,000.

And the reeve of Barrhead, a rural municipality west of Alberta’s capital city, told The Canadian Press now was “not the time to get in the way” of farmers and cattle producers getting ready for the spring season. Potential curfews weren’t the only action announced by Alberta on Thursday.

The government said it will be working with restaurants to ensure patio diners are from the same household and – after announcing earlier in the week a reduction in non-urgent surgeries – that Alberta Health Services was preparing a critical care triage plan “as a last resort” in case the hospital system was overloaded.

As well, Alberta’s premier promised stricter enforcement by way of backstops to COVID-19 fine collection. The province is looking at restricting registry services if a person owes for violating a public health order.

The moves were an about-face by Jason Kenney, who had said one day earlier, “The notion that there’s a direct linear relationship between the restrictions and the viral spread is not the experience of this pandemic.”

Kenney said his government has only been consistent in its approach to balancing COVID-19 public health orders with negative social, mental health and economic effects – and has remained reactive to an evolving situation.

“With respect to the fact that we change policy from time to time – so has every jurisdiction on the face of the Earth,” Kenney told reporters.

“Our policy will not be governed by a foolish kind of consistency.”

“We are in a really tough spot right now because there are so many flip flops the premier is doing,” he said.

“Who knows what tomorrow will bring?” Bratt added.

In the Edmonton area, the new rules surrounding curfews will likely only impact major urban centres including Edmonton and Sherwood Park but not St. Albert or Leduc.

Bratt told CTV News Edmonton in an interview that the changes are sending a strong signal to UCP caucus members.

“What he’s (Kenney) really saying is those restrictions are not going to apply in small town Alberta, where I’ve got opponents within my own caucus.”