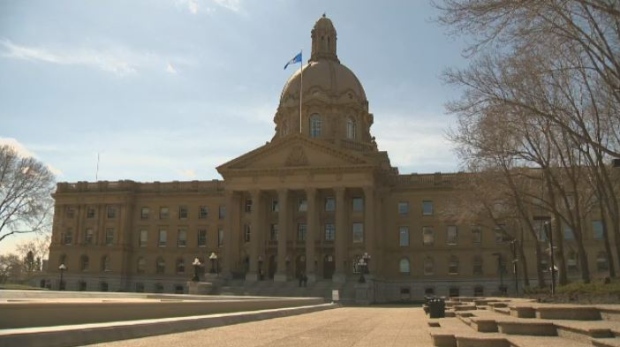 EDMONTON — Employees at a home for persons with developmental disabilities are celebrating after an arbitrator found the provincial government was not meeting its own policies on compensation.

On Friday, an arbitrator determined that the provincial government violated its pandemic single-site policy for staff at Michener Centre.

The Michener Centre in Red Deer is a provincially run facility for adults with developmental disabilities.

The province’s single site order mandates all staff working in a long-term care home or designated supportive living facility are required to work at only one site for the duration of the pandemic.

The policy was intended to curb COVID-19 transmission and was backed by a ministerial order signed by Labour and Immigration Minister Jason Copping in April 2020.

Under the single site order, any employee who normally worked at multiple facilities but was prevented from doing so would receive extra hours to make up the loss of income.

The Alberta Union of Provincial Employees (AUPE) said in a statement to media, that back in August it filed a policy grievance against the government of Alberta.

According to the union, staff at the publicly-run facility in Red Deer approached AUPE after they were told to select Michener as the only site they could work at but did not receive proper compensation for lost hours of not being able to work elsewhere.

Bonnie Gostola, an AUPE vice president, said in a statement that the arbitration result was a win for workers who bravely spoke up about losing hours.

“This is a big win for vulnerable workers everywhere who love providing compassionate care, but don’t make enough money doing it and have to stretch themselves thin across multiple jobs just to feed their families,” Gostola said.

“The whole purpose of the order was to protect the sick, the disabled and their caregivers from the devastating financial and health effects of COVID,” Gostola added. “But at Michener, the UCP weaponized it to reduce the income of frontline heroes.”

Approximately 90 employees were affected and each lost thousands of dollars in income, AUPE says.

AUPE will now consult with staff at Michener and the province to negotiate financial compensation.

Rajan Sawhney, community and social services minister for Alberta, said in a statement to CTV News Edmonton that the single site order was always aimed at protecting staff and residents from COVID-19.

“The health, safety and well being of staff and residents at Michener Centre is of upmost importance,” Sawhney said. “I recognize that employees have taken on additional challenges and exposure risk to meet the increased health and personal care needs of clients they serve.

“This was the reason the public health order was put in place, to protect the most vulnerable Albertans and the staff who care for them.”

Sawhney added that she received a copy of the arbitrator’s decision and that he is “committed” to determining next steps in coordination with Finance Minister Travis Toews.