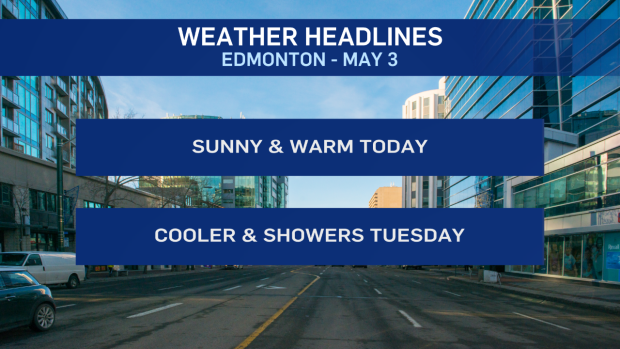 EDMONTON — After picking up some moisture over the weekend, we’re set to get some more precipitation this week.

Tuesday and Friday both have a very good chance of showers and/or periods of rain.

Sunny skies and a frosty start to the day in the Edmonton region.

But, we’ll stay mostly sunny through this afternoon with a high near 14 degrees in Edmonton today.

A trough of low pressure develops in western Alberta late today and then begins to move east slowly.

There’s a chance of showers (possibly mixed with some wet flurries) in areas from the Peace Country southeast through Edmonton and on into southeastern Alberta overnight/early Tuesday.

The Edmonton region’s best chance of some steadier light rain looks to be in the late morning or midday Tuesday. That said, the risk of showers continues right through the day and into the evening.

If you were to draw a line from Peace River southeast to Coronation – most areas south and west of that line can expect at least SOME precipitation Tuesday.

However, north and east of that line probably won’t get any moisture.

Temperatures will be considerably cooler on Tuesday.

But, we’ll bounce back to the mid to upper teens for daytime highs Wednesday and Thursday.

AND…I think this morning is the only morning we’ll be dealing with frost in the area this week.

Friday brings another chance of showers and/or periods of rain. That’s still several days out. We’ll see how that system develops over the next few days.

Tuesday – Cloudy with a 70% chance of showers or periods of light rain.

Friday – Cloudy. 60% chance of showers or periods of rain.