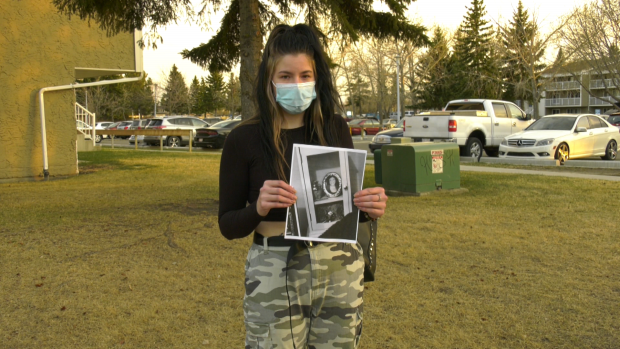 EDMONTON — A woman is searching for keepsakes of her mother which disappeared from the sidewalk during a move.

As Kendrah Hodgson and her cousin moved into their new Callingwood apartment over the weekend, they unloaded their belongings onto the walkway and then carried them inside.

Among the items was a cabinet containing her mother’s urn, picture, jewelry, ID, perfume and small blue scarf.

On a Hollywood set, to the tune of a laugh track, the situation would have comedic bones – but is stomach churning in real life.

“When I lost that, I was so heartbroken that I lost not just her stuff, but my mom.”

The cabinet hasn’t turned up at either her landlord’s office or the police station, but Hodgson hopes whoever has the cabinet is holding onto it while they track her down.

“I would hate to think somebody took it to pawn it off or sell it because to me, it wasn’t fine stuff,” Hodgson said.

“Everything else is just … not really that valuable to any other person but to me.”

Hodgson can be contacted through posters she’s hung up around the neighbourhood or online.