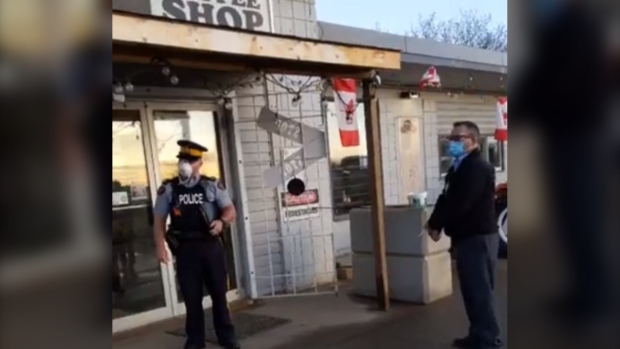 EDMONTON — Alberta Health Services has closed down a café near Mirror, Alta., after it repeatedly flouted COVID-19 public health restrictions in recent months.

The Whistle Stop Café reopened in April despite provincial health guidelines banning indoor public dining. Management had planned to host an event on the weekend that would have included live entertainment.

In a statement, AHS said it had “physically closed” the café and “prevented access to the building until the operator can demonstrate the ability to comply.”

“Every effort has been made to work collaboratively with the operator as well as the property owner to come to a resolution before progressing to further enforcement action,” the statement reads.

“At this time the operator of the Whistle Stop Café has decided not to follow these mandatory restrictions, despite efforts by AHS and other partners, nor have they attempted to work to reduce the risk of COVID-19 transmission.”

AHS says it had received 413 complaints from the public about the venue since the start of the year.

In a statement to CTV News, Mounties said they attended to “preserve the peace and maintain public safety.”

“The Alberta RCMP is a steadfast partner in this health crisis and continues support aAHS in any future enforcement they pursue.”

Last weekend, Mounties visited the café and removed its liquor after Alberta Gaming, Liquor and Cannabis revoked its liquor licence.

Yesterday, Premier Jason Kenney announced a number of new restrictions as Alberta continues to have the highest per capita new and active case counts in the country.

Since the start of the pandemic, 2,099 Albertans have died and more than 8,100 have been hospitalized.