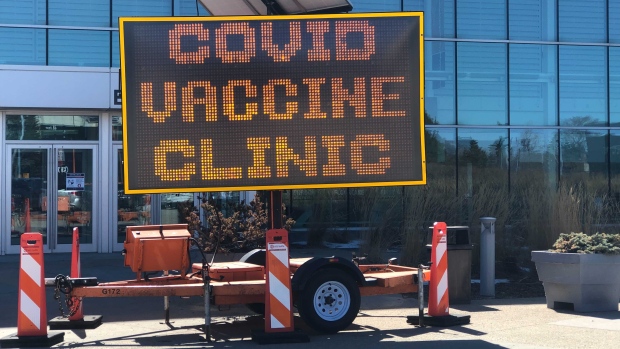 EDMONTON — Albertans born in 1991 or earlier were able to book a COVID-19 vaccine appointment starting Thursday.

While there were reports on social media of queues of tens of thousands of people – not unlike every other opening day in Alberta’s COVID-19 vaccine program so far – many said the virtual lineup moved relatively quickly.

By 10 a.m., 50,000 appointments had been made, AHS spokesperson Kerry Williamson said.

All appointments being made are for either the Pfizer or Moderna product.

The Johnson & Johnson supply that arrived earlier in the week is being held by Health Canada due to a potential quality control issue.

Alberta’s allocation of those doses were originally scheduled to be sent to the province’s COVID-19 hot spots, Banff and Fort McMurray in the Wood Buffalo region, along with Alberta’s available AstraZeneca supply.

Canada has not yet confirmed when it will receive another shipment of AstraZeneca.

In announcing the expanded age eligibility on Tuesday, Premier Jason Kenney also announced bookings will open Monday, May 10, to Albertans born between 1992 and 2009.

According to the latest data, about 1.7 million Albertans had received at least one dose of COVID-19 vaccine. More than 305,000 are fully immunized with two shots.