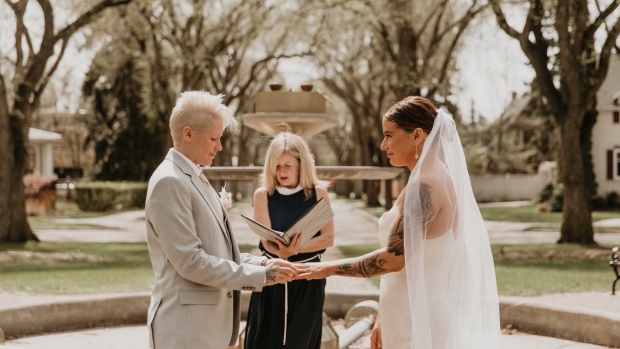 EDMONTON — A pair of famous Edmontonians were married by the leader of the official opposition Saturday.

Since 2010, Jen has participated in almost every World Rugby sevens tournament. The star rugby player was the captain of Canada’s Women’s Sevens rugby team at Rio 2016 where she helped the team win a bronze medal.

Shawnee has won the CBC Searchlight Rising Star 2020 award and was one of the Allan Slaight JUNO Master Class winners. The award-winning musician also does charitable work away from the microphone including helping Indigenous youth and LGBTQ+ communities through organizations such as We Matter and Kids Help Phone.

The couple were married in an intimate outdoor ceremony at Alexander Circle in the Glenora neighbourhood of Edmonton.

Rachel Notley said in an interview with CTV News Edmonton that she had grown to know Jen over the past few years.

“We were hanging out online in the last 12 months,” Notley recalled. “We were just chatting and she was very excitedly telling me that she and Shawnee were getting married. So I awkwardly announced that I can do weddings.

Notley laughed, adding that she was not sure if that was Jen and Shawnee’s plan exactly, but said nonetheless that the couple decided to have her as their officiant.

Congratulations to Jen Kish and @shawneekish . Thank you for asking me to be your marriage commissioner today. I wish the best for you both on your next adventure together. ❤️✨ pic.twitter.com/rDueMOPT0h

“I was just very excited for the two of them and really excited for them to be able to do something so positive in what are otherwise challenging times,” she added. “It was really a privilege to be asked to be part of it.

“They’re very much in love with each other and they were very happy to be getting married.”