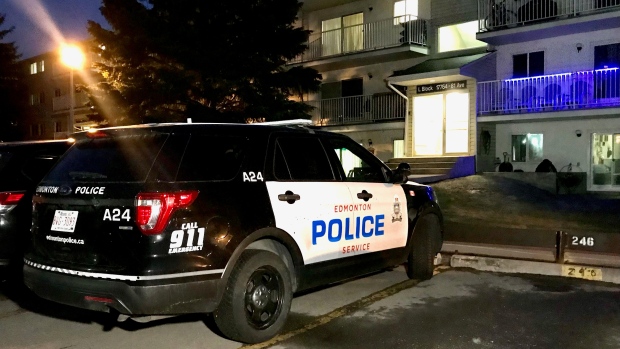 EDMONTON — Homicide detectives were called out to a new case in west Edmonton Monday night, after a man was found dead in an apartment complex.

Another man was quickly arrested nearby in relation to the case, Staff Sgt. Jared Hrycun confirmed to CTV News Edmonton.

Police were called to a large walk-up rental complex on 177 Street and 81 Avenue just after 9 p.m.

EPS would only say victim was found dead somewhere inside the building and officers later arrested a suspect at the West Edmonton Mall Transit Centre.

Hrycun said he didn’t know the ages of the victim or the suspect.

Homicide detectives arrived at the scene around 11 p.m.

Police said residents of the complex were all able to stay in their suites, and Hrycun didn’t believe there was any risk to the public.

The case will be considered a suspicious death until an autopsy confirms a cause, which is standard procedure.

Edmonton police are also investigating suspicious deaths that occurred on Saturday and Sunday.