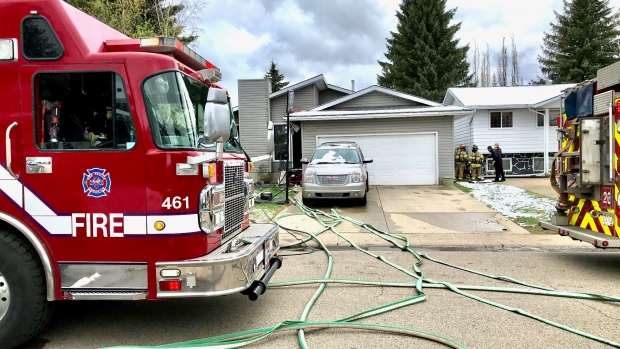 EDMONTON — An Edmonton man is in critical condition with serious burns after he helped several kids escape their burning house Wednesday.

“First arriving crews were here within three minutes and they found a house fully involved,” District Chief Howard Samycia said at the scene.

“The kids said that there was one male occupant in the basement. Firefighters went in and rescued that individual and brought him out.”

The man was rushed to hospital and Alberta Health Services said he is in critical condition.

At 6 p.m. AHS said they had transported an additional child, bringing the total to five kids and one adult in hospital.

Samycia believed the children had minor smoke inhalation and the man had several burns.

Neighbour Hadi Ali said he broke a basement window and the man in the home passed four children through to him.

“I saw the fire coming to the home. I called the fire (department), and when I was there I heard the screams and I broke the window and I (helped) save four children,” Ali said.

Ali believed all the children he helped were under five years old.

“They were ok, but the man was burned. It was very scary.”

He said he wasn’t able to pull the man through the window, but firefighters rescued him minutes later.

“He was very concentrated on getting his kids out,” Samycia said.

The inside of the home was gutted by flames. The cause and damage estimate are under investigation.