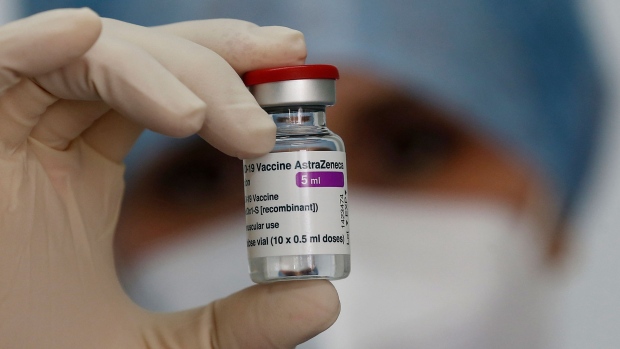 TORONTO — Several provinces, including Ontario, Quebec and Saskatchewan, have suspended the use of the AstraZeneca COVID-19 vaccine for first doses over concerns of rare blood clots, a move that has attracted both criticism and confusion.

As Canadians who received one dose of AstraZeneca wait for instructions about their second dose, experts continue analyzing data surrounding the risk of these rare blood clots especially when it comes to administering a second dose of the vaccine.

With concerns that some 30,000 doses will expire in Ontario pharmacies by the end of May, and approximately 250,000 doses across the country are set to expire by the end of June, experts are encouraging Canadians to get their second dose, reiterating that the benefits outweigh the risk.

“For starters, a big congratulations for people that got it as their first dose because it’s a very good vaccine and it provides very good protection against COVID-19,” said infectious disease specialist Dr. Isaac Bogoch in a telephone interview with CTVNews.ca Thursday. “We see strong data coming from the U.K. demonstrating that this vaccine is truly impressive.”

Though Bogoch notes one cannot ignore the rare blood clotting events associated with the vaccine, he says it’s important to present Canadians with accurate data to help them to make an informed decision.

RISKS WITH GETTING A SECOND ASTRAZENECA DOSE ARE LOW

“The best data we have is that the risk is probably just over one in one million [citing U.K. data],”said clinical researcher and Toronto physician Dr. Iris Gorfinkel in a telephone interview with CTVNews.ca Wednesday.

That sentiment was reiterated by Bogoch.

In an emailed statement to CTVNews.ca Thursday evening, the Public Health Agency of Canada (PHAC) confirmed that “based on information from the U.K., the reported rate of VITT after the second dose of the AstraZeneca vaccine is much lower than after the first dose.”

VIPIT is a specific type of blood clot that can stem from receipt of the vaccine, and it is different that the body’s regular clotting mechanisms or conditions like deep vein thrombosis.

VIPIT symptoms usually occur between four and 20 days after vaccination.

Britain, which has had the AstraZeneca shot in circulation much longer than Canada, has administered more than 23 million first doses of the vaccine, with more than 240 cases of rare clotting reported, and 9 million second doses, with 15 clots reported after the second shot according to a report updated Thursday.

A U.K. government bulletin published May 7 says “there have been no safety concerns identified for thrombosis/thrombocytopenia associated with the second dose of the AstraZeneca vaccine, nor with other COVID-19 vaccines currently approved for use in the U.K.”

PHAC said the smaller rate of VIPIT reported in the U.K. may be “due to the smaller number of second doses administered to date and the shorter time since vaccination for second doses.” The rate of VIPIT after the second and first dose may continue to change but PHAC stated the information is being “monitored closely.”

In Canada, approximately 2.1 million people have received one dose of the AstraZeneca vaccine with three deaths associated with blood clots reported.

At a federal briefing Thursday, deputy chief public health officer Dr. Howard Njoo said “there have been 34 reports of blood clots with low levels of blood platelets following immunization [of AstraZeneca]… reported to the federal level, 21 have tested positive for ps4 antibodies, meeting the definition of vaccine induced immune thrombotic thrombocytopenia or VITT.” Njoo said laboratory testing on the remaining 13 individuals is ongoing.

The Ontario COVID-19 Science Table Advisory estimates the incidents of VIPIT to range from one in 26,500 to one in 127,300 doses of AstraZeneca administered. Although the estimates vary by country, the advisory table states that the rate of VIPIT in Canada is estimated to be approximately one per 55,000 doses, with almost all reported cases occurring after the first dose.

“If you did well with the first shot, the risk of blood clot of any serious side effect with a second shot is exceedingly low, one in a million or even less,” infectious disease expert Dr. Brian Conway told CTV News Vancouver last week.

Bogoch said there are three main points to get across to the public about AstraZeneca.

“Number one is that this is a very effective vaccine and we have real world evidence of that from the United Kingdom,” he said. “Number two is that the risk of blood clotting events is appears to be markedly lower after the second dose compared to after the first dose – with the caveat that it’s still rare after the first the first dose. Number three, it appears that people may have an option to choose AstraZeneca or an mRNA vaccine as a second dose.”

ARE SOME PEOPLE AT A HIGHER RISK OF DEVELOPING VIPIT?

At this time, the available evidence “does not indicate if certain people are more likely to develop this rare event than others,” the PHAC statement reads.

According to their statement, there is no evidence to suggest that VIPIT is more prevalent in people who have had blood clots before, people who have a family history of blood clots, people on birth control or other hormones, pregnant people, people with autoimmune diseases or people with low platelets or platelet disorders because VIPIT does not develop like common types of clotting problems.

Dr. Ishac Nazy, associate professor of medicine at McMaster University in Ont., and director of the McMaster Platelet Immunology Laboratory says experts are still searching for the indicators of what the risk factors could be.

“First of all, it’s rare,” Nazy said in a telephone interview with CTVNews.ca Thursday. “Second of all, clotting happens in individuals for many different reasons, and the mechanism of clot formation induced by the AstraZeneca vaccine is this specific mechanism that requires these antibodies that can activate platelets leading to the clotting events.”

Both Nazy and the Ontario COVID-19 Science Advisory Table say the only recommendation in place for potential risk factors is if someone has had heparin induced thrombocytopenia or cerebral sinus vein thrombosis, “which happens because of similar antibodies to the ones seen in VIPIT.” If that is the case, Canadians should avoid taking the AstraZeneca and choose a mRNA vaccine option like Pfizer or Moderna.

And while the rare risk continues to exist, unlike in the first round of AstraZeneca doses “we know way more about this clotting disorder,” Nazy said.

“We know how to identify it, there are symptoms that Canadians can identify at home, doctors know how to diagnose it in the lab, we know how to confirm that and the treatment options have become available to doctors,” he said. “So even in the very rare chance that you might get the clot after the second dose, there are ways to identify it and treat it.”

WHAT ARE THE OTHER OPTIONS?

There has been some suggestion that mixing and matching COVID-19 vaccines may be a viable option for patients who have received a first dose of AstraZeneca.

On Tuesday, a Spanish study using preliminary data found that giving a second dose of Pfizer to people who had a first shot of AstraZeneca is safe and effective, with the immune response 30 to 40 times greater in those who took a Pfizer shot than those in a control group who only had AstraZeneca.

Gorfinkel cautioned that people who want to mix and match vaccines may need to “plan for” the potential for more side effects, such as headache, fever, and muscle aches.

On Thursday, Ottawa announced a COVID-19 vaccine “mix and match” study through the COVID-19 Immunity Task Force and the Vaccine Surveillance Reference Group.

The new study, dubbed “mix and match of the second COVID-19 vaccine dose for safety and immunogenicity” (MOSAIC) will look at the effects of mixing COVID-19 vaccines approved for use in Canada.

PHAC emphasized in their statement that until results from mixed COVID-19 studies are released, the National Advisory Committee on Immunization (NACI) “continues to recommend that a vaccine series be completed with the same COVID-19 vaccine product when possible.”

The health organization said that if the product used for the first dose is not available, “attempts should be made” to complete the vaccination schedule with a similar type of COVID-19 vaccine, such as mRNA with mRNA.

“it is currently not recommended that vaccines of different types be used in the same series,” the statement reads. PHAC said recommendations will be made about the possibility of mixed schedules once the full study evidence is available.

“We understand that many are awaiting this information and we commit to providing a recommendation as soon as possible.”

But Gorfinkel cautioned that the convoluted messaging surrounding the AstraZeneca COVID-19 vaccine may feed into a certain form of vaccine hesitancy, called “the ambiguity effect.”

“This is a reason why people are vaccine hesitant where somebody introduces ambiguity – in other words, expresses that ‘it’s complicated,’” she said.

“Then what happens is that people say, ‘why should I get it at all?’” she continued. “There is a tremendous fear of making the wrong decision, people would rather make the error of omission – not doing it – than make the error of having done something that later is harmful.”

Bogoch said that regular and transparent communication is needed to prevent further hesitancy and confusion.

“We have to be transparent with all the data that we have and transparent with that data in real time,” he said. “There’s some good Canadian data from the various provinces and it would be helpful to compile that nationally and have ongoing dialogue and discussion about what the risks are.”

In their emailed statement PHAC said that Canadians who received a COVID-19 vaccine “made the right choice” to protect themselves, their families and their communities.

“It is understandable that many who received a first dose of the AstraZeneca vaccine are wondering which vaccine they should receive for their second dose,” the statement continues. “We understand many are waiting for this information and we commit to providing it as quickly as possible – NACI anticipates being able to provide this recommendation once data on immune response from the U.K. study becomes available.”

Gorfinkel hopes that future messaging and studies on AstraZeneca and other vaccines can cut down on the ambiguity effect and other forms of vaccine hesitancy and encourage Canadians to continue to get vaccinated.

“The take home message is, get your second shot,” she said.