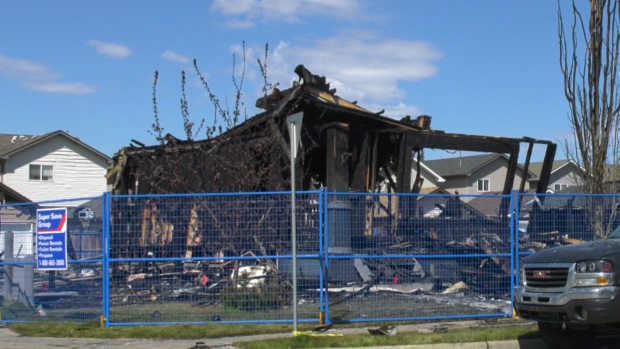 EDMONTON — Families are trying to salvage what they can after fire tore through three homes in the north end Friday.

“It’s very tough to look at, especially for the kids when they came back from school,” said Ereddad Kharraz. “They were shocked, everything is gone.”

Kharraz and his family lived in one of the three houses that burned down, several others were damaged by the flames.

“We cry a little bit so we can release some pressure,” said Kharraz. “It’s tough.

Firefighters were called to a garage fire just after 2 p.m. Friday. The windy conditions caused the fire to spread quickly.

“It was so fast,” said Ashley McCaw, who lives a block away.

She said despite the distance, the speed with which the fire spread made her nervous.

“(We made) sure all of us have an outfit and our birth certificates in a bag, just in case,” said McCaw.

According to fire officials, everyone made it out of the homes, but two people suffered burns. They were treated at the scene before being taken to hospital, there was no word on the extent of their injuries.

Kharraz said he and his wife were at work when the fire broke out and were glad their kids were back at school this week.

“Imagine if my kids were here and were online and were using headphones or something and can’t hear anything,” said Kharraz.

The family hopes to be able to eventually rebuild their home, instead of moving.

“I want to rebuild here,” said Kharraz. “I want to stay in this neighbourhood.”