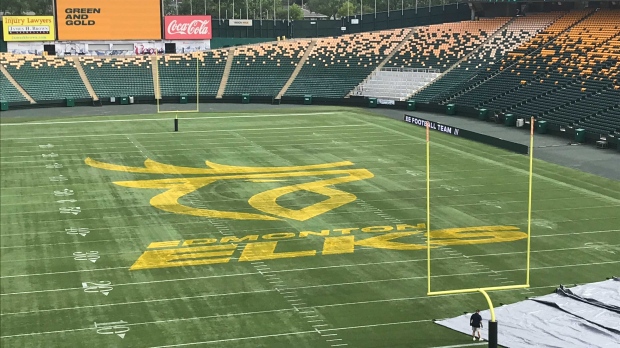 EDMONTON — The CFL team headquartered in Alberta’s capital city will be known as the Edmonton Elks.

The club made the announcement Tuesday morning at Commonwealth Stadium, the new team name and logo in the background.

This is a breaking news story. More to come…

Edmonton’s CFL club – known for more than 10 months simply as the EE Football Team – will make an “important announcement” on June 1.

In its annual report released in May, the club did not give an indication of when a new moniker would be chosen, but said it expected “to be in a position to announce a new name shortly.”

The team had previously said it intended to reveal its rebrand in the spring.

It discontinued its previous brand in July 2020 saying, “Recent findings demonstrate that views regarding the team name are shifting. While many fans are deeply committed to keeping the name, others are increasingly uncomfortable with the moniker.”

“We feel it is important to make this change in response to the findings of our recent engagement and research. Going forward, we want the focus to be on the work we do in the community and our team’s excellence on the field as the CFL’s most successful franchise,” said the chair of the team’s board of directors Janice Agrios.

Watch the announcement by the EE Football Team live on CTVNewsEdmonton.ca at 10 a.m.

The CFL is expecting to return this year with a full 18-game season but has delayed its planned start to Aug. 5 and reduced its schedule to 14 games.