A pair of black bear sightings in Alberta’s capital region – one wandering through a community neighbourhood at dawn, another believed to be the cause of death of some livestock – are unusual, but may be the result of a cool, wet spring, experts say.

John Norton, who gets up around 4 a.m. to get ready for work, was watching Hell’s Kitchen with a cup of tea on Monday when he saw “what I thought was a rather large black dog out on street.”

It was a bear – for the first time in Norton’s nearly 30 years in the town 50 kilometres south of Edmonton – walking down his driveway and across the street into a neighbour’s yard.

Spectacular, amazing, surreal, he described the sighting – a complete opposite reaction of one Lamont County farmer who believes a black bear spotted by neighbours is responsible for four dead or missing cattle.

She discovered the carcasses of a calf and a cow on May 29, after hearing earlier a bear had been seen in their area. Another cow and calf are missing. 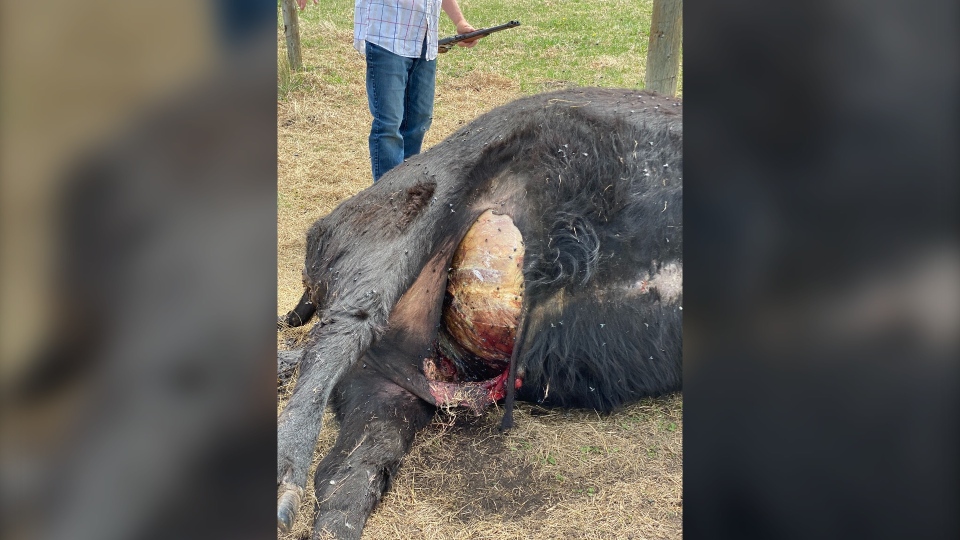 According to the department of justice and solicitor general, which oversees Alberta Fish and Wildlife, officers are attempting to capture a bear in the Chipman area after a livestock kill.

“I couldn’t believe it,” Young remembers thinking when she saw the cow carcass. Left behind were tufts of dark hair on a barbed wire fence, and what she thought were claw marks on the calf’s neck.

“When we got looking and all that… something had happened to it.”

WHAT DO THE SIGHTINGS MEAN?

The province’s carnivore specialist called it not uncommon for bears to travel further east than Edmonton, though perhaps infrequent.

Paul Frame was surprised, however, by Norton’s video of a bear in a residential area in broad daylight.

“It was likely looking for food. Humans have lots of yummy smells – to a bear – in their yards. You know: garbage, bird feeders,” Frame explained.

He works with Fish and Wildlife on animal management plans and could say there has been “heightened bear activity” all the way from the Montana border to Rocky Mountain House.

He believes that could be partly due to a late, cold and wet spring delaying the “green up” of areas bears usually forage. Springtime is when bear-human encounters are most frequent.

“Maybe bears aren’t able to access food where they normally had been at the times when they come out of hibernation, when they’re normally real hungry. So they’ve been seeking it in more human-dominated landscapes.”

Alberta’s roughly 850 to 950 grizzly bears are mostly concentrated near the B.C. border – through the national parks and furthest east in the Slave Lake area.

Comparatively, Alberta’s black bear population numbers about 40,000. And what Frame calls their “range,” or the area they’re found, is much larger. It covers the entire northern half of the province, and a wider portion of the southwestern half. 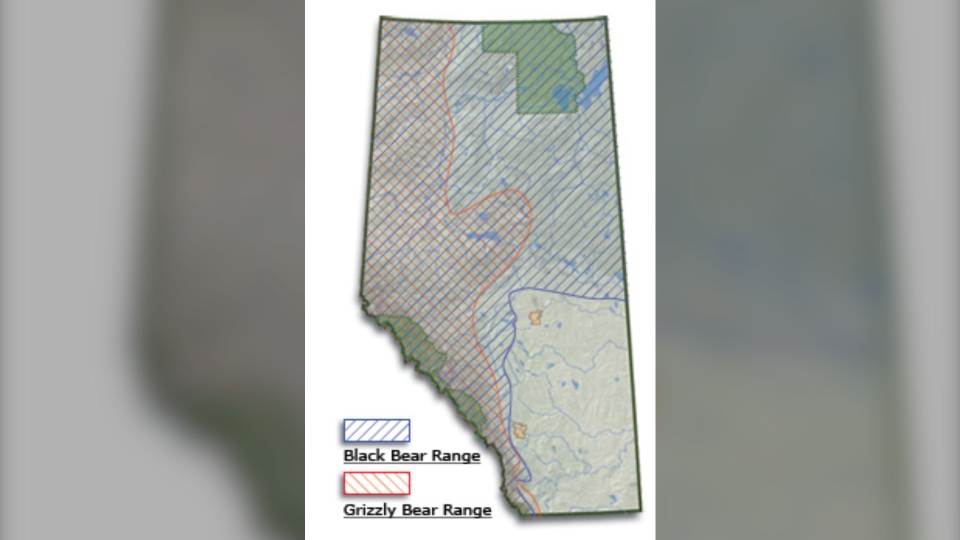 But the black bear range doesn’t quite reach Wetaskiwin and Lamont counties, so sightings there could mean an expansion by the population, Frame said. He pointed out private landowners are allowed to kill a bear on their property.

But it’s hard to know how the animals ended up Norton’s Street or Young’s land.

Frame commented, “We’ve had two recent fatal maulings in Alberta. And there just may be a heightened sensitivity by people to bears and more of a desire to share that information with other Albertans.”

A grizzly bear believed to be responsible for one of two fatal attacks in southern Alberta was euthanized by the province in late May.

In the weeks since the attacks, a bear safety expert has noticed an uptick in interest for her services.

“There’s a lot of fears in the hearts of Albertans right now. I went through this same experience when Isabelle Dube was killed years ago in Canmore,” Kim Titchener told CTV News Edmonton. “The community was just beside themselves.”

So she recognizes the feeling that, for example, has prevented Young from planting her garden before Fish and Wildlife trap the bear near her home.

“We just want it gone and (to) know he’s not here anymore,” the Lamont County resident had said.

But Titchener sees the time as ideal for connecting people to resources. She’s behind Bear Safety & More and RecSafe With Wildlife, which offer training to both the public and government agencies and try to correct wrong or outdated ideas.

“They’re posting these questions on Facebook groups, hiking clubs, running clubs, biking groups, backpacking groups, and they’re getting some really bad advice, unfortunately. Like, yesterday, I saw one guy was like, ‘You should just put air fresheners into the forest and then the bears will start to recognize human smell.’ I was like ‘What?!'” Titchener exclaimed.

Instead, she advises leaning on what the science has proven is most effective: hiking in groups of at least three or four, keeping pets on a leash, making regular noise that would inform a bear you’re getting closer. All are preventative measures meant to avoid an encounter altogether, since grizzlies often attack out of defense.

As a last resort tool, everyone in the group should be carrying bear spray, Titchener said. She does this herself when on her acreage in Nordegg.

And Frame suggested if Millet, or other urban residents, are concerned, they could secure attractants like garbage or pet food, gardens, chicken coops and bee hives with deterrents like electric fence.