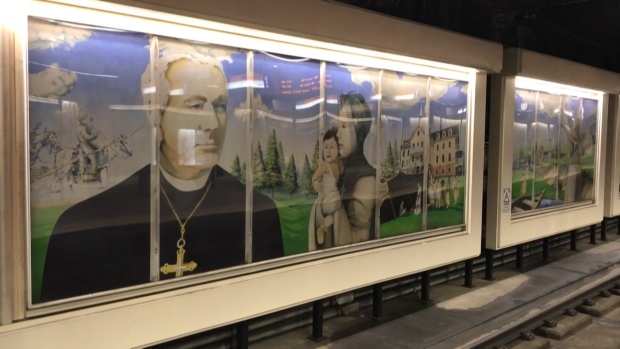 EDMONTON — Edmonton Mayor Don Iveson wants the city to rename Grandin LRT station and cover the mural inside it as soon as possible.

“The widely circulated quotes from Grandin about what the objects of the school were, which very clearly were to dispossess Indigenous families of their children and dispossess those children of their language, of their culture, of their spirituality, and in at least 215 cases that are new to us, their lives,” Iveson said Thursday.

“That wasn’t the intent directly, but that was the consequence.”

The mayor will introduce a motion next Monday to remove Grandin reference from the station and civic signage, cover the Grandin mural and find a name that contributes to reconciliation.

“What has changed is that now with yet more visceral evidence that the legacy of residential schools on a unambiguously represents cultural genocide in this country,” Iveson said.

The mural inside the station depicts the bishop with a nun holding an Indigenous baby with the Bishop’s Palace in the background.

It was commissioned in 1989 by Francophonie Jeunesse l’Alberta and painted by Edmonton artist Sylvie Nadeau.

Iveson said the city will take advice on next steps from a working group of survivors, Indigenous people and the Francophone community.