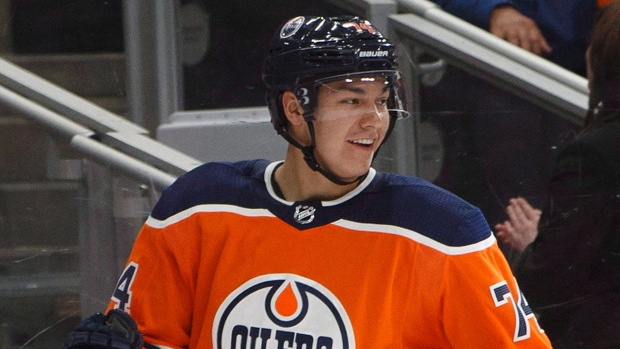 EDMONTON — Shortly after the Winnipeg Jets swept the Edmonton Oilers in the first round of the Stanley Cup playoffs, defenceman Ethan Bear’s social media feeds were filled with hateful, racist comments.

Bear, who was born and raised on Ochapowace First Nation in Saskatchewan, was singled out and blamed for the team’s crushing defeat where an untimely giveaway helped the Jets tie the game for an overtime win.

But, for Bear, the vitriol is about much more than unsportsmanlike behaviour from hockey fans, but a deep-seeded racism that has been fuelled, in part, by the history of Canada’s residential schools.

“It’s something our people have been dealing with and grieving with and trying to heal from for many years now. It’s really tough to comprehend, you know, why it happened,” Bear told CTV National News during an exclusive interview.

“There’s a lot of stereotypes against our people that get used against us and I’m not sure why.”

With the support of the Oilers, Bear denounced the racist reaction in a two-minute video posted to the team’s social media accounts following the loss. Days later, the remains of 215 Indigenous children would be found at the site of a former residential school in Kamloops, B.C., sparking renewed outrage and pain for Indigenous people in this country, including Bear and his partner Lenasia Ned.

“Lenasia, both her grandparents were at that school,” Bear said. “My parents and even my older brother have been through residential schools.”

Bear, 23, was born a year after Canada’s last residential school closed its doors. And though he says his parents largely sheltered him from their own experiences, he understands the pain his community is going through.

“They have their own experiences… they’ve kind of sheltered me from them. But my older brother, he’s been through it and I see how it affects him. Like he still has scars from residential school and he only went there for day school,” he explained.

“I wouldn’t say it affects me but I understand their pain. And each day I try to use that as motivation to push through whatever I’m going through, because I’m grateful for where I’m at and I know that whatever comes my way it can be worse.”

As a young player, Bear – who was drafted to the Oilers in 2015 – was inspired by Indigenous hockey players such as Jordin Tootoo and as Carey Price. And though he would go on to play in the same ranks as his heroes, he knew it wouldn’t be easy.

“I’ve experienced racism my whole life,” he said. “That was my goal… I wanted to be in the NHL to show other First Nations kids that we can do it. And since they did it, and they’ve faced so much criticism and racism throughout their careers, I knew whatever was going to come my way I was not going to let it affect me or stop.”

But there is growing community support behind Bear.

There have been several rallies held in Edmonton and his home province of Saskatchewan in support of him and against racism.

Neil Sasakamoose, son of the first Indigenous Canadian NHL player Fred Sasakamoose, also spoke out on Bear’s behalf, saying it’s disheartening to see the same kind of racist vitriol his dad faced when he played for the Chicago Blackhawks in 1953.

“There’s a lot of us cheering for him. I hope he sees it, I hope he feels all the love from across Canada. I really hope he feels it, and just strengthens his legs and gets him back standing up tall and proud, for all of us here,” said Sasakamoose.

Despite his own challenges, Bear says it’s important that the Indigenous community be given the space to share their trauma related to residential school and stories of racism.

“I think just let people tell their stories. Listen to their experiences and, you know, just be open minded about it.”​