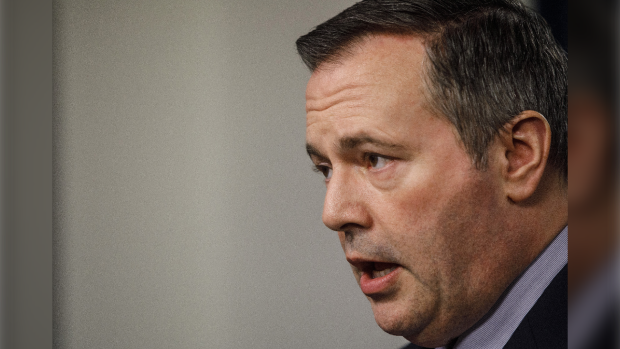 Rajan Sawhney and Leela Aheer are taking Kenney to task for refusing to take responsibility for photos that appear to show Kenney and others ignoring COVID rules while enjoying drinks and dinner on the penthouse patio of a building near the legislature grounds.

Aheer, the minister for culture and multiculturalism, said Kenney should apologize, adding that the photos must be disappointing to see for people who have been following the rules.

“I am confused and, like you, extremely hurt, and I’m so sorry for any pain, anger, or frustration this may have caused you,” Aheer wrote on Facebook Saturday.

“All of us make mistakes, but this one is a big one, and I am truly sorry.

“Our leadership should sincerely apologize.”

Sawhney, the minister for social services, said in a radio interview that she has been trying to follow the COVID rules and has kept her distance from her mom to keep them safe.

“I would never have done (what they did) in the picture,” Sawhney told RED-FM in Calgary on Friday.

“I was in my chamber and as a representative of the (Calgary-North East constituency) I don’t feel good. I know what to do.

“I would say if they committed a mistake they must accept it openly. (The) photo clearly speaks.”

Sawhney’s comments were made in Punjabi. An English translation was provided by Red-FM news director Rishi Nagar.

“Much of the public concern about this incident has been about the hypocrisy of senior officials breaking their own rules,” wrote Pitt. “I can certainly understand these concerns.”

UCP backbench member Dave Hanson endorsed Pitt’s comments, noting in a Friday Facebook post that Kenney had previously promised to evict from caucus any members who broke the COVID rules.

“I’m with you Angela,” wrote Hanson. “Albertans are angry again and rightly so.”

Kenney’s office did not respond to a request for comment.

Photos of the Tuesday night dinner were taken surreptitiously from long range and delivered anonymously to media outlets. They depict Kenney and key members of his inner circle, including Health Minister Tyler Shandro, sitting at a table on a deck outside Kenney’s temporary office in the penthouse of the Federal Building.

The penthouse suite was nicknamed “Sky Palace”’ after it was learned in early 2014 that then-premier Alison Redford had been retrofitting it as a work residence with high-end accents and furnishings.

Kenney has insisted the dinner was within public health rules because it was under the 10-person limit on outdoor social gatherings.

But he has not addressed apparent violations of masking and distancing rules. Dr. Deena Hinshaw, chief medical officer of health, said she wasn’t there, so couldn’t say if rules were broken.

This is the third wave of backbench discontent Kenney has faced since the new year, when he disciplined a number of members for travelling abroad over the Christmas holidays while Albertans were urged to stay home to reduce COVID spread.

In April, 17 backbenchers openly challenged Kenney’s health rules, saying they were needlessly restrictive and counterproductive. He didn’t punish them for that, calling it “free speech.”

In her Facebook post, Aheer also challenged Kenney’s viewpoint on cancel culture in the wake of the remains of 215 children discovered at a former residential school in Kamloops, B.C.

The discovery sparked renewed debate on how to honour and recognize historical figures such as John A. Macdonald, Canada’s first prime minister but also the architect of the residential school system.

Last week, Kenney reiterated his revulsion at the horrors of the residential schools, which saw thousands of Indigenous children taken from their families over decades, isolated and abused.

But Kenney said Macdonald and many of Canada’s leaders are complicated figures, pursuing at times racist and punitive policies, and that to take down their statues or remove their names from public buildings would be to erase history itself.

Aheer, in her Facebook comments, said, “Changing the names of schools and educating people about these atrocities is not `cancel culture.’

“Cancel culture is what has happened to our First Nations by not acknowledging these atrocities and those responsible.”

This report by The Canadian Press was first published June 6, 2021.