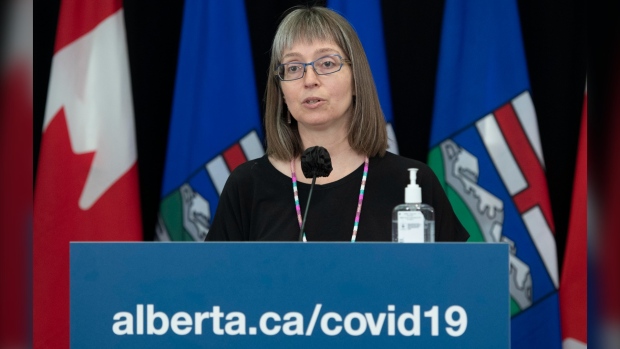 EDMONTON — More than two-thirds of eligible Albertans have now had a first dose of COVID-19 vaccines as the province reported 139 new cases on Tuesday.

It marks the second day in a row the province added fewer than 200 new cases and sixth straight day with fewer than 300 new cases.

Three more Albertans, including a Calgary Zone man in his 40s, were reported to have died Tuesday, bringing the total number of COVID-19 deaths to 2,251.

There are now 336 people in hospital including 85 in intensive care units.

The province reported a 4.18 per cent test positivity based on approximately 3,443 tests.

“Most importantly, Alberta’s average positivity rate is declining in all zones, which indicates progress is being made provincewide.”

Alberta is poised to enter Stage 2 of its reopening program on Thursday.

Stage 2 relaxes restrictions on outdoor gatherings, sports, and post-secondary institutions among other changes.

Stage 3, which lifts almost all restrictions, will begin two weeks after 70 per cent of eligible Albertans have received at least a first dose.