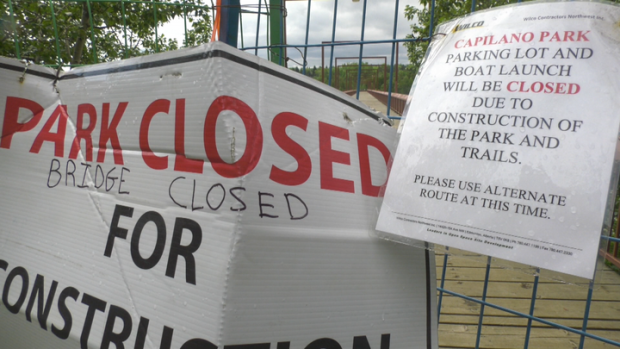 EDMONTON — Construction on the Capilano footbridge means the bridge is temporarily off limits to pedestrians – but some are choosing to ignore closure signage.

Nicole Wolfe, director of Open Space Infrastructure Delivery at the City of Edmonton, said Capilano Park, located on the south side of the river near 50 Street, is undergoing construction to improve lighting, benches, parking and underground renewal.

The closure of the popular Capilano footbridge— which a quarter of a million people used last summer — has left Edmontonians frustrated with the lack of trail detours.

“It would have been awesome to see the city place signage on top of the hill so people don’t need to descend all the day down,” said pedestrian Stephen Raitz. “The detour to the west would be about a 7-kilometre walk or bike ride.”

Following the suggested detour would take anywhere from 50 to 80 minutes. Raitz said there was not enough notice.

“We would hope to see the city add some way finding signage further up and do some outreach with community leagues or community organizations,” he said.

But Wolfe said the lack of signage is largely due to people removing them.

“We’ve had quite a journey with signage actually. There has been lots of signage put out and we have increased the amount of signage but a lot of it seems to be removed, damaged, vandalized and thrown in places that we can not get it,” she said.

Wolfe explains workers are having a “heck of a time” getting people to obey closure signage. She said the active construction site is not safe for pedestrians.

“We are really having some significant issues with behaviour,” she said. “At this point, we’re trying to do our best by asking people to remove themselves from site.”

Wolfe said the construction workers do daily fence checks to make sure people are not pushing through.

The project is expected to end July 31.

The Brothers of Auschwitz: A heartbreaking and unforgettable historical novel based on an untold true story