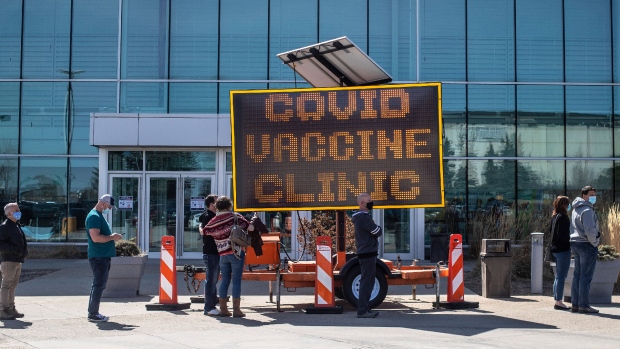 The province administered 5,342 first doses Wednesday, increasing the percentage of the eligible population with one shot up to 69.9 per cent, just under the 70 per cent target for Stage 3 reopening.

Alberta appears on track to meet its Stage 3 reopening target of 70 per cent of eligible Albertans having had at least one shot as soon as Friday.

Stage 3 of the province’s reopening plan, which lifts virtually all health restrictions, will go into effect 14 days after the 70 per cent target is met.

Just over 920,000 individuals, or about 24.2 per cent of the eligible population, have now received a second dose of vaccine.

Also Monday, active cases fell to 2,471. Two more deaths due to COVID-19 were reported Thursday: a man and woman in their 70s from the Central and South zones respectively. Their deaths bring the total number of Albertans to have died due to COVID-19 up to 2,280.

There are now 242 people in hospital receiving care for COVID-19, including 58 in intensive care units.

The province recorded a test positivity of 2.91 per cent based on about 6,000 tests.

After strong initial demand, the pace of first shots administered tapered off quickly in early June. It took the province 20 days to go from 40 per cent of the eligible population with a first dose to 60 per cent.

Should the province reach the 70 per cent mark tomorrow, it will have taken 21 days for first doses among the eligible population to increase from 60 per cent to the 70 per cent Stage 3 threshold.