EDMONTON — A statue outside a church in north-central Edmonton was vandalized Saturday evening.

The Pope John Paul II statue outside Holy Rosary Catholic Church at 11485 106 Street in Edmonton was covered in red paint and red handprints.

Red footprints could be seen around the statue and on the steps leading up to the main entrance of the church. Teddy bears and other stuffed animals were laid at the base of the statue.

The Edmonton Police Service (EPS) said the incident occurred around 11:10 p.m. Saturday evening when a female was seen vandalizing the statue with paint.

EPS says the Hate Crimes and Violent Extremism Unit has been notified of the incident but the investigation will remain with the northwest division until the hate crimes unit had time to properly assess the incident.

Police said no further details were available from them as they continue their investigation.

‘WE ARE SADDENED BY THE VANDALISM’

In an interview with CTV News Edmonton, Andrzej Makarewich of the Canadian Polish Congress Alberta Society said the church was shocked when to see the St. John Paul II statue vandalized.

“We look at cameras, security cameras and we found that young woman came here at 11:10 p.m. and spent about 10 minutes to damage our monument,” Makarewich said.

He described the incident as a “stab” to the heart of the Polish community.

“Somebody who did this knows how to hurt our community because John Paul II is a saint,” he added.

Makarewich said that as the statue was being vandalized, security footage shows cars passing by the church.

“It was at least two cars who seen this incident and did nothing,” he shared. “This is not the Edmonton I know.”

CTV News Edmonton has not seen the security footage. 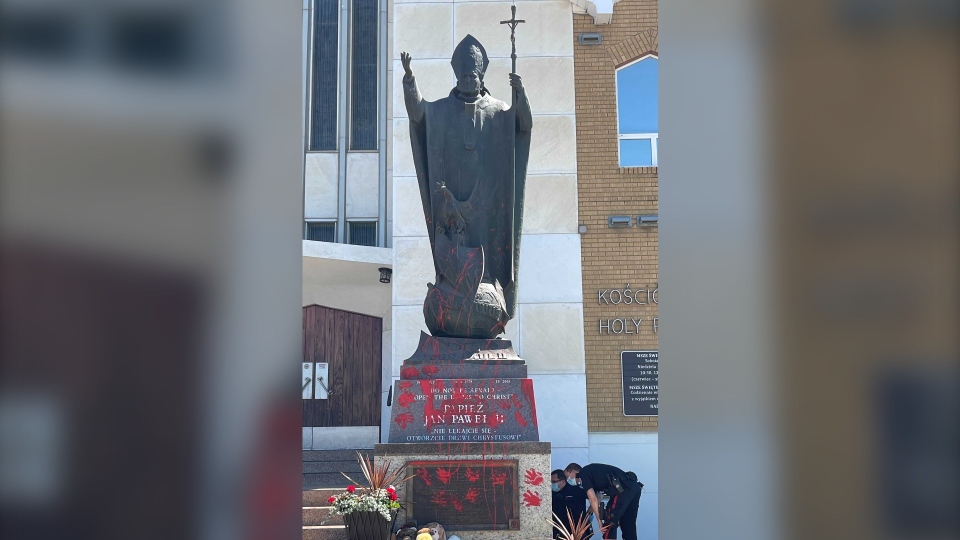 “We are saddened by the vandalism of the statue of Saint John Paul II at Holy Rosary Parish,” said Archbishop Richard Smith of the Catholic Archdiocese of Edmonton said in a statement.

“At a time when our country is acutely aware of the need for reconciliation with the Indigenous Peoples of this land, it is helpful to recall the words with which Pope John Paul II, during his 1987 visit to Fort Simpson, strongly affirmed the inherent goodness of Indigenous culture and traditions, and expressed solidarity with the First Nations, Metis and Innu Peoples in defense of their rights: “my coming among you looks back to your past in order to proclaim your dignity and support your destiny.”

Smith added that he echoed those words.

“The Church extols the equal human dignity of all peoples and defends their right to uphold their own cultural character with its distinct traditions and customs,” the archbishop said.

“The parishioners of Holy Rosary parish, and the people of the Archdiocese of Edmonton, stand with the Indigenous Peoples in this moment of profound sorrow. With them, we lament the sad legacy of residential schools and look forward to the healing of our relationships.”

Pope John Paul II, born in Wadowice, Poland, was the first non-Italian pope since the 16th century and the second longest servig head of the Catholic Church in modern history. He visited Canada three times.

Holy Rosary Church, a Polish and English parish, has priests that are members of the Missionary Oblates of Mary Immaculate. 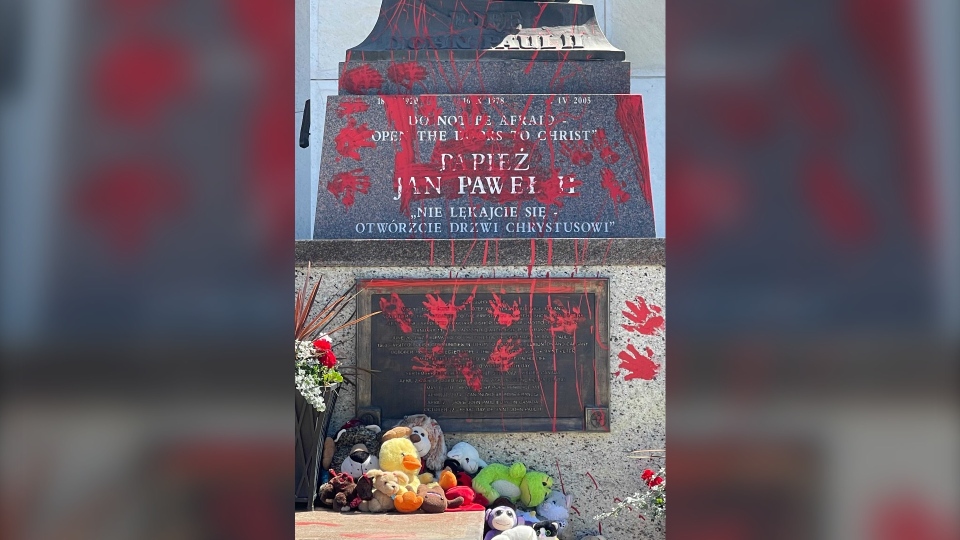 Other churches across Canada have been vandalized, including St. Paul Co-Cathedral in Saskatoon.

At least four churches in British Columbia on First Nations reserve land have been burned.

The incidents have occurred following announcements from the Tk’emlúps te Secwépemc that it had discovered the remains of 215 children in unmarked graves at the site of the former Kamloops Indian Residential School.

On Thursday, the Cowessess First Nation announced it had also located 751 unmarked graves near the location of a former residential school in Saskatchewan.

Authorities have not announced any official indication that the fires or acts of vandalism are connected to the discoveries at residential schools.

Marlene Poitras, Assembly of First Nations regional chief of Alberta, said in an interview that not just First Nations communities are hurt by the discoveries of unmarked graves and that there are more productive ways of moving forward.

“It’s really unfortunate,” Poitras said. “We don’t want to lose that (community) support by doing these sorts of things.

“Let’s work together in a good way,” she added. “I think that’s critical right now.”

With files from CTV News Vancouver