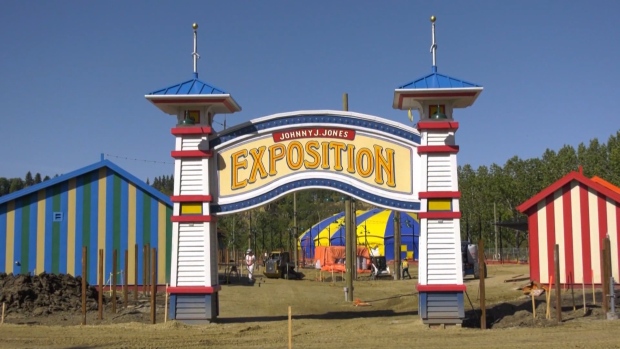 EDMONTON — For the first time in nearly three years, Fort Edmonton Park will open to more than construction crews this week.

The public will have an opportunity to see what came of a $165-million renovation and expansion starting Canada Day, including new features like an Indigenous Peoples Experience exhibit, new expo attractions, and a new front entry plaza.

Media will also be given a sneak peak of the 30,000-square foot Indigenous Peoples Experience. The show was created with help from the Métis Nation of Alberta and Confederacy of Treat Six First Nations, and is said to explore the histories, cultures and experiences of First Nations and Métis people in the Beaver Hills region.

On Wednesday, some families will get early access to the renovated park to tour its new front entry plaza and admissions area, with a café, gift shop and gender-neutral washrooms.

“We have waited a long time to see Edmontonians walk through the front gates so they can see what we’ve been building. This is an exciting time as summer hits and COVID restrictions begin to lift,” Darren Dalgleish, president and CEO OF Fort Edmonton Management Company, said in a statement.

“We’re so proud of the new Indigenous Peoples Experience and all the work we’ve done with First Nations and Métis communities in our city, and we can’t wait to see kids’ faces light up with all the fun on the Midway. It will really be a chance for families just to have some old-fashioned fun this summer!”

Crews first broke ground for the project in October 2019, and officials originally planned for the park to reopen the 2021 May long weekend.

Added to the 1920s-inspired midway was a new Ferris wheel, outdoor maze and more games.

All three levels of government contributed money for the expansion: the federal government nearly $48 million, the provincial government $33.5 million, and the City of Edmonton $72.6 million. The Fort Edmonton Foundation also raised $10 million.