EDMONTON — As temperatures in Alberta’s capital city pass record highs this week, many Edmontonians are looking for creative ways to stay cool. For some in the city, that might even mean sleeping at their place of employment.

Of course, when you work at a hotel that might not sound so bad.

“When we knew it was going to be so hot, we thought that we’d reach out to all of our associates,” the Westin hotel’s Joumana Ghandour told CTV News Edmonton, “and we offered for them to come stay at the hotel for a very special rate.”

Ghandour said so far five of the Westin’s staff members in Edmonton have taken advantage of the hotel’s air conditioned rooms thanks to the discounted rate.

“It was more to make sure that everybody was safe.”

At $79 a night, right now the downtown Edmonton hotel is offering a special “Beat the Heat” discount for the general public as well.

“You can come stay in a cold, air conditioned room. You don’t have to worry about the heat,” said Ghandour. “We have lots of water, and we even have a pool you can dip in to.”

Statistics Canada numbers from 2017 show that back then, 42 per cent of Canadians had central air conditioning, but in Alberta, 78 per cent did not.

Up until Tuesday, Victoria Jones could have counted herself as one of those have-nots in Alberta when it came to central air.

“Would’ve been nice if it was done Sunday,” the Garneau neighbourhood homeowner told CTV News Edmonton, “but I’ll take it in advance of tomorrow’s what? The hottest day possibly ever we’ve had in Edmonton?”

Jones said she had to send her dog to her parent’s air conditioned home in order to keep it cool.

“It’s been disgustingly hot,” she said, “and fans only do so much.”

Luckily for Jones, she booked the central air conditioner installation for her Edmonton home two weeks ahead of Tuesday. That’s the standard wait time right now for the company that’s doing the job at her house.

“It’s still June,” said Jones. “If this were August, this wouldn’t be weird to me.” 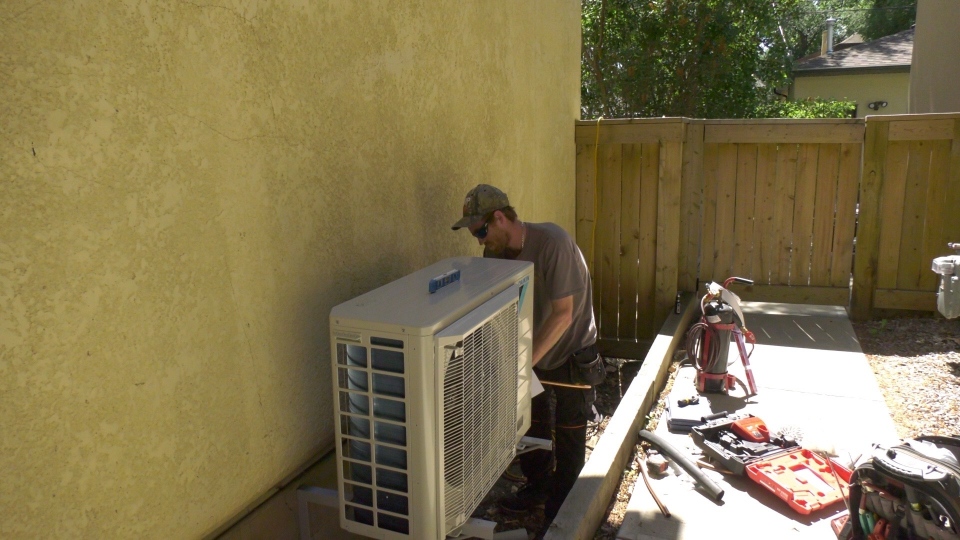 “We’re trying to get two done a day just to keep up with the volume,” Weiss-Johnson’s Matt Renauld said. “Everyone wants A/Cs this time of year.”

Not surprisingly, it seems those who do have A/C units are using them.

On Tuesday, Alberta’s electric grid operators warned that for a second straight day, the province could break a summertime record for power usage.

An official with the Alberta Electric System Operator (AESO) blamed increased use of air conditioners for the spike in power consumption.

“We were surprised by how high demand went,” AESO’s Leif Sollid said.

That demand for power consumption in the province reached such high levels that the AESO issued an emergency energy alert on Tuesday afternoon.

This situation is due to the heat wave driving higher demand and a decline in available generation. Please conserve energy during peak hours 4-7p.m. #ABElectricity pic.twitter.com/H3Me92Uaae

As the AESO asks Albertans to conserve power where they can, Jones believes the need for her new A/C unit is only going to get more frequent.

According to CTV News Edmonton meteorologist Josh Classen, Edmontonians are now in the “core” of the hottest days, with the heat wave expected to continue through the week.