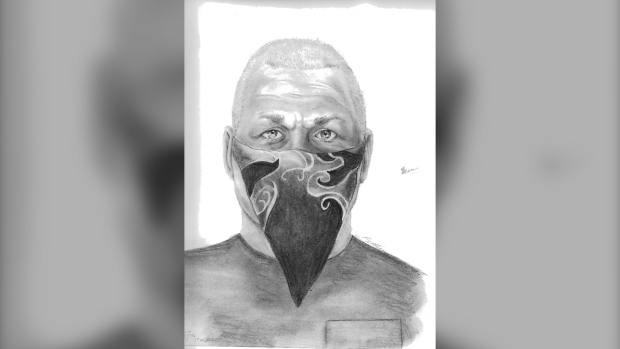 EDMONTON — Investigators have released a composite sketch of the man who pushed two Muslim women to the ground while armed with a knife.

After the June 23 attack, St. Albert Mounties northwest of Edmonton released a description of the suspect: a white man about 50 years old who was around six feet tall and had light hair and eyes.

In a sketch shared by investigators nearly a week later, he has shortly cropped hair and was wearing a patterned bandana across his face.

Anyone who recognizes the man is asked to call the St. Albert RCMP detachment at 780-458-7700 or Crime Stoppers.

According to police, the hijab-wearing sisters were walking along an unpaved path near Alderwood Park and Anthony Henday Drive when the man approached them and began yelling racial slurs. He knocked both women to the ground and threatened one with a knife. The other was knocked unconscious. Both sustained non-life threatening injuries.

Despite a search of the immediate area with a police dog, the attacker wasn’t found.

The assault, which is being investigated as hate motivated, was denounced by local leaders and the community.