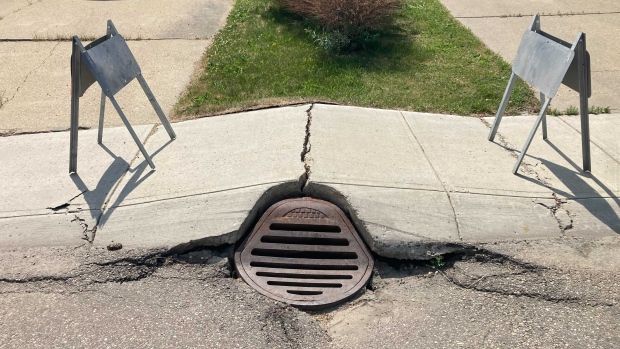 EDMONTON — As the heat wave in Edmonton is forecasted to come to an end over the weekend, there are reminders of how much the sizzling conditions impacted the city.

A full week of soaring temperatures had various impacts, from fans selling out at stores across the city to businesses temporarily closing or restaurants altering menus.

“It’s too hot, standing over the stove and flipping pans of macaroni for like six hours,” said Andrew Cowan, owner and head chef of Northern Chicken.

Emergency rooms in the Edmonton area saw at least 125 heat-related visits since Tuesday morning, but no heat-related deaths.

In comparison, EMS crews only responded to seven heat-related calls in both Edmonton and Calgary last Friday when temperatures peaked at 26.9 degrees, Williamson said.

Edmonton Fire Rescue Services responded to 30 grass fires since last Friday, including nine on Wednesday and seven on Thursday.

Alberta Wildfire said there were a total of 10 active wildfires burning throughout the province – including eight under control – on Sunday.

As of publication, there were 34 wildfires classified as active by Alberta Wildfire on Friday. Twelve were being held by fire crews, 16 were under control, and six were out-of-control. Approximately 2,299 hectares of land are being affected by all active wildfires.

The largest out-of-control fire, located east of Fox Creek, Alta., had an estimated size of eight hectares, as of publication.

At least 57 sidewalks in Edmonton buckled or heaved due to the heat wave, said city communications advisor Derek Logan.

“Concrete expands when the temperature rises, and the expansion can be large when there is extreme heat,” Logan added.

“When expansion is large enough that it reduces the space between slabs or joints of a sidewalk, buckling can occur and the result is severely uneven sidewalks.”

Logan said that city crews placed signs to alert people of uneven concrete and would repair the area once temperatures lowered.

Anyone can report a sidewalk that has been raised due to the heat by calling 311 or downloading the Edmonton 311 mobile application. Repairs are prioritized based on the risk they present to the public.