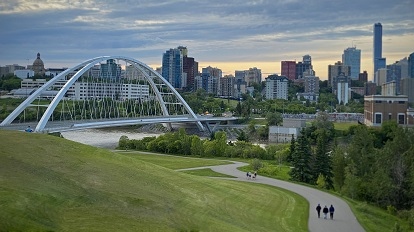 EDMONTON — The provincial government is expecting Alberta to have a population of 6.4 million by 2046 – a number experts say presents both opportunities and challenges.

That number comes from the Ministry of Treasury Board and Finance’s latest report forecasting population and demographic changes.

Alberta is expecting to add 1.9 million residents over the next 26 years – largely through immigration to the province – and that 80 per cent of the population will live in the Edmonton-Calgary corridor.

With growing populations already concentrating in urban environments, and further growth predicted, Northcott said urban design will need to ensure living spaces and neighbourhoods are accessible to all.

“Urbanization is a global trend,” he said. “It’s something that we have seen for some time now.

“Does it constitute a problem or challenge? You can phrase it that way. But it also constitutes opportunities to build infrastructure, housing, to provide services to a growing population.”

In his view, having a population forecast is useful but only if action and planning for that number occurs so that the province can be ready.

“We need to rethink the way we construct our living environments, homes, roadways, and buildings that benefits the entire spectrum (of people) now,” he added.

Alberta is projected to have a senior population that will nearly double in size over the next 20 years with nearly one-in-five being over the age of 65.

In Northcott’s view, there are both opportunities and challenges that come with an ageing population.

Instead of viewing it solely as a challenge, the sociologist suggesting viewing having a large senior demographic as an opportunity for innovation, change, and the economy.

“Seniors have pensions, savings, and equity in their home,” he added. “These present opportunities.”

Having a large demographic of seniors means there will need to be innovation and new opportunities created for how long-term care is provided, Northcott said.

“We will have to rethink it,” he added. “COVID has shown that the current labour force is gendered and racialized in ways that are disadvantaging them. We will have to innovate long-term care for the seniors but also the younger people who will serve those seniors.”

For Northcott, while the report is based on best data available and long-term projections, all that could be invalidated if the Alberta economy fails to diversify or another oil industry crash occurs.

“In 25 years, a lot can happen,” he said. “The good news is, is that we are still hopeful about growth in Alberta.”

“We’ve already baselined what that will look like,” she said.

The city plan for Edmonton scales based on every additional increment of 250,000 population growth. It incorporates stages and targets to ensure the city is expanding transit, affordable housing, and preserving green spaces.

“The plan is structured in a way that we can look at each time horizon and at the time that we are approaching each of those we can start to reconfigure what are our policies, how we are doing.”

Additionally, Butterfield said the city assesses what other jurisdictions across Canada are doing and how urban design can be adapted to fit Edmonton.

“We are always looking for ways to ensure we are as viable of a city as we can be.”