EDMONTON — Emergency crews were on scene of a large garage fire in north Edmonton Tuesday morning.

The home was said to be abandoned, with no people occupying it at the time of the fire.

“It looks like it’s ready for [demolition] to build something new on it,” Capt. Tom Groot, with Edmonton Fire Rescue Services, said.

A neighbour told CTV News Edmonton she ran out of her home with her three kids after spotting the blaze.

“Woke up, looked and saw bright orange and said, ‘Oh my god.’” 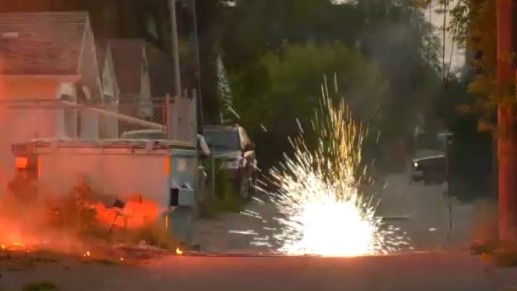 Laura recalled grabbing her phone, running outside with her family and calling 911.

Speed said power lines were coming down, and sparking in the alley as they landed on the ground.

Groot told CTV News crews were able to knock down the flames within 10 minutes after arriving on scene.

There was damage to neighbouring buildings to the north and south, as well as the building across the road. Groot said the damage to them was minor.

Police and fire are investigating the cause.