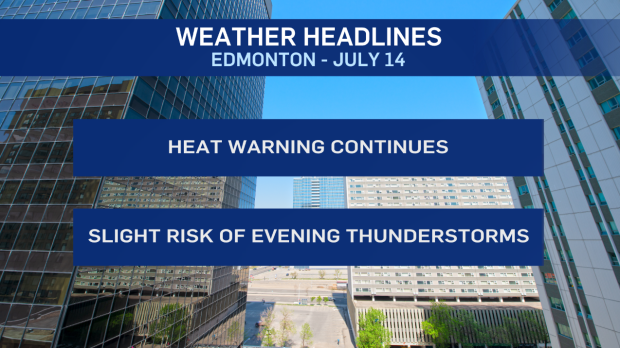 EDMONTON — Sunny with a few clouds and a forecast high of 31 or 32 in Edmonton today.

That’ll mean the city’s been hotter than average for 20 of the past 24 days.

AND…we’ll have hit 30 degrees or hotter on 12 of those days.

HALF of the past 3+ weeks will have had daytime highs in the 30s!

As we’ve mentioned several times in the past two weeks, the all-time record for the most 30-degree days in a summer is 14 in 1961.

But, we’ll probably break that mark and get our 13th day in the 30s.

AND…early next week has the potential for one or two more.

So…midway through July…we’re well on pace to break that record.

We’re also on pace for an extremely dry summer.

Edmonton’s only real chances for precip in the next few days come in the form of isolated evening showers/thunderstorms.

We have a slight risk tonight and late Thursday. The best chance for the city looks to be late Friday.

Those aren’t going to blanket the city and produce a slow, steady soaker.

Some parts of the region will get hit, many others will watch the clouds slide around them.

Further north, the system that may give us some moisture late Friday looks like it will stall out over northern Alberta Saturday.

It’s a few days off and this could change. But, as of now, it appears areas from Peace River east to Fort McMurray will get a goo soaking rain Saturday.

Unfortunately, the highest amounts should be north of Slave Lake/Athabasca/Lac La Biche. Areas south of that line should get some…but it may not amount to much.

Today – Sunny with a few clouds.

Tonight – Partly cloudy. Slight risk of a shower or thunderstorm.

Thursday – Mainly sunny. 30% chance of a late-afternoon or evening. shower or thunderstorm.

Friday – Partly cloudy. 40% chance of an evening or overnight shower or thunderstorm.