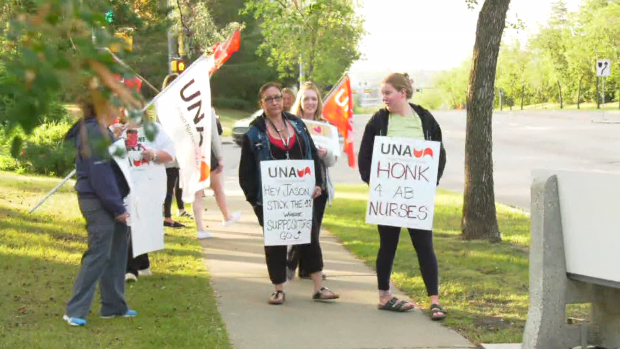 EDMONTON — Alberta’s nurses union is drawing attention to the province’s proposal to roll back nurses’ wages by three per cent with an information picket at a St. Albert hospital.

By 6:30 a.m. Monday, about a dozen picketers had gathered outside the Sturgeon Community Hospital.

Among them was registered nurse and union local president Orissa Shima, whose sign around her neck read, “Willing to strike for a fair contract.”

She said she and her colleagues wanted to let the public know they aren’t prepared to take a wage cut after the pandemic, which they believe would be damaging to the public health care system.

“Nurses have been here, working hard — tirelessly actually — and we’re looking for a fair contract and we’re not willing to take a rollback at this point,” Shima told CTV News Edmonton.

“What is a thank you when we’re telling us we’re worth less?” she asked. “What I’m hearing from my members is, yeah, it’s a slap in the face, it’s a punch in the gut, after all we’ve been through and given during this pandemic.”

A week earlier, Alberta’s finance minister said the proposal was part of work to get the province’s finances “back on track” and that nurses there make 5.6 per cent more than their counterparts across the country.

According to Statistics Canada, nursing wages averaged $44.12 in June, the highest rate of the provinces but near B.C. and Saskatchewan’s roughly $43 wages and Manitoba’s $41.46 wages. Across Canada, the median was $39.72.

Both Shima and a nurse of 35 years called that last change dangerous.

“Things we were fighting for then,” Sharon Lloyd commented, referencing the 1998 nurses strike, “we are still fighting for now: patient safety, patient ratios, a nurse in charge on a unit. Yes, compensation is important. We don’t want to be rolled back; we were rolled back in the 90s and we were rolled back for job security — that’s what they’re saying now. That they’ll roll us back for job security. And we don’t believe them. We don’t trust them anymore.”

The government returns to the bargaining table with United Nurses of Alberta on Aug. 4 and 5.

The government is also proposing a four per cent rollback for hospital staff.​