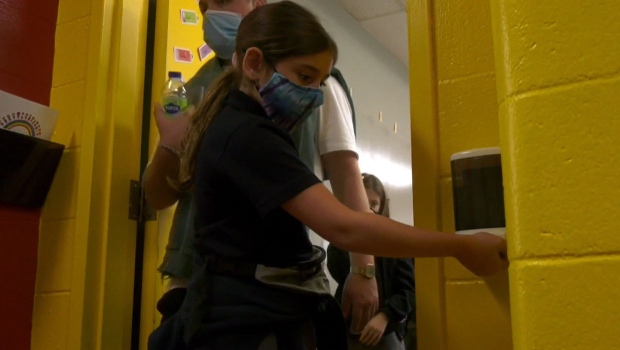 CALGARY — Many students, parents and teachers say they’re feeling abandoned by the Alberta government after another provincial change to masking and isolation rules put in place because of the COVID-19 pandemic.

The province announced on Wednesday that face coverings will not be mandatory when school starts back up in September.

It also nixed rules surrounding virus isolation, making quarantine no longer mandatory if Albertans get sick with COVID-19 after Aug. 16.

One parent says she’s seriously considering taking a leave from work to keep her children from reentering their classrooms in the fall.

“We are going to be in a position where we don’t know how high the case numbers are because they are no longer testing (to the same extent) and so we don’t know if school is safe,” Sarah Mackey told CTV News. “You can say, ‘vaccines are incredible,’ but that only works in places where vaccine coverage is high enough to have that mitigating effect.”

Mackey says her two young daughters are worried about the coming year. And she was just one parent sounding the alarm Thursday.

Many Albertans echo the concern of COVID-19 entering their child’s school, especially considering those born in 2010 or later are not eligible for immunization.

“I understand that we are going to shift into a new sort of way of thinking about COVID, but we are not asking for another 18 months of this level of dedication. We’re asking for a couple of months until we can get these kids vaccinated and keep schools a safe place,” Mackey said. “That doesn’t seem like too much to ask.”

“It’s quite possible that schools don’t even know when students are attending school after they’ve been positively identified as a COVID case,” he said. “(The government) is just going to allow COVID to run rampant in schools.”

Situational masking was required in schools in the 2020-2021 school year.

According to Support Our Students Alberta, 87 schools were forced to close after the January break thanks to outbreaks.

Health Minister Tyler Shandro told CTV News officials will be keeping a close eye on any outbreaks in the new year, but stopped short of explaining how that may be possible without extended testing and isolation periods.

“This is a plan that is based on the science and based on the data,” Shandro said. “We didn’t see the significant concerns of transmission in the schools and (Hinshaw) is going to continue to monitor the situation in our schools.”

There is currently a low rate of severe outcomes amongst children who have the virus.

But Mackey argues she’s worried about the long term impact of COVID-19 if one of her two young daughters were to get the virus from their classroom.

Education Minister Adriana LaGrange turned down an interview request for this story.

Her office says specific guidance for the school year is still being finalized and will be released in mid-August.