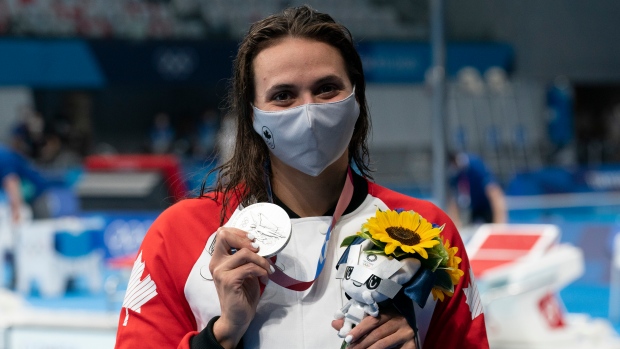 TOKYO — Several minutes after going into the red for another Olympic medal, Kylie Masse was still panting and puffing in an effort to restore oxygen to her depleted body.

The 25-year-old from Lasalle, Ont., earned silver in the 200-metre backstroke Saturday at the Tokyo Aquatic Centre, four days after winning silver in the 100.

The latter is Masse’s signature race as she’s a two-time world champion in it. The 200, however, has been her project for several years.

“It’s fun. It’s definitely painful. A lot more painful than the hundred,” Masse told reporters between breaths. “It’s going to be a stinger and you have to have stick it out and have faith in your training and trust the process.”

Saturday’s race played out similar to the 100. Masse pushed the front-end pace to lead at the turn, but was pipped at the wall again by Australia’s Kaylee McKeown.

Masse (pronounced Moss) lowered her own Canadian record to two minutes 5.42 seconds, behind McKeown’s winning time of 2:04.68. Australia’s Emily Seebohm was third in 2:06.17.

“I know I have high expectations of myself, but I’m really happy to have gotten on the podium a second time at an Olympic Games,” Masse said.

“I knew it was going to come down to the last bit. I think maybe from how I felt, my stroke rate maybe slowed down a bit at the end.”

Hers was the fifth medal produced by the Canadian women’s swim team in Tokyo.

“I don’t think it will really set in until we get home and are able to kind of take a step back and realize what we accomplished,” Masse said.

With two medals apiece in Tokyo, Masse, Mac Neil and Oleksiak will get a shot at a third Sunday in the medley relay.

A sixth Olympic medal would equal the number Canadian women generated in the pool in 2016 in Rio.

Masse earned bronze in the 100-metre backstroke in Rio, but didn’t qualify at Canadian trials to race the 200 there.

Taylor Ruck of Kelowna, B.C., was sixth in the 200 women’s backstroke final Saturday in her first career Olympic final in an individual race.

When the University of Toronto pool closed because of the COVID-19 pandemic, Masse joined Ruck’s training group at Toronto’s Pan Am Sports Centre.

“Having her push me every single day in backstroke sets, she definitely contributed to my backstroke success,” Masse said.

Humility, dedication and grit are the ingredients that make Masse a world-class backstroker, says 21-year-old Ruck.

“I’m not kind of an attention-seeking person,” Masse said. “That’s always been kind of my personality to fly below the radar. I kind of enjoy that.

“The people that are getting recognized are well-deserving and should be recognized. I’m quite content with what I have.”

Brent Hayden of Mission, B.C., finished tied for ninth in the men’s 50-metre freestyle and didn’t make it into the eight-man final.

The Canadian men will also race the medley relay Sunday in Olympic swimming’s finale in Tokyo.

This report by The Canadian Press was first published July 30, 2021.