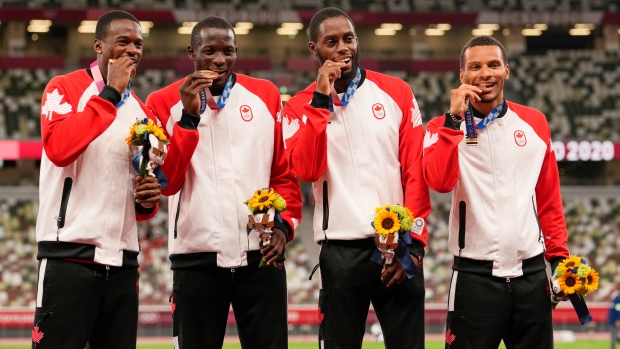 TOKYO — The hot and muggy weather in Tokyo that wreaked havoc on athletes throughout the Games could not slow down or cool off Canada on the final full day of competition.

But the inadvertent dip into Tokyo’s Sea Forest Waterway by the two canoe sprinters who put Canada’s medal tally over the top? Well, that’s one way to beat the heat.

A bronze medal by Katie Vincent and Laurence Vincent-Lapointe in the women’s canoe double 500 metres gave Canada its 23rd medal in Tokyo, the country’s highest tally at a non-boycotted Summer Games.

After the pair crossed the finish line in third place, Vincent, sitting in the back of the canoe, gave Vincent-Lapointe a congratulatory pat on the shoulder. Vincent-Lapointe appeared to reach back to embrace her partner but lost her balance, tipping the boat and sending them both tumbling into the water.

Vincent-Lapointe, who dominated the sport for much of the past decade and fought hard to see it included in the Games, said her Olympic experience was what she’d been waiting for her whole career.

“These Games — I waited long, long, long for them, and I’ve given everything I have. And I’m super proud that I was able to finish this on such a great note with Katie,” she said.

“It was worth everything.”

For Vincent-Lapointe, who took silver in the C-1 200 on Thursday, the Games have been a comeback of sorts.

In addition to waiting for her sport to be included, the 29-year-old paddler from Trois-Rivieres, Que., had to fight to clear her name following an “adverse analytical finding” during an out-of-competition drug test two years ago.

The International Canoe Federation cleared her to compete in January 2020, accepting that Vincent-Lapointe was the victim of third-party contamination of a banned substance.

Her partner in the C-2 said she was proud of both of them for making it through the uncertainty.

“It’s so nice to see that journey end that way. I think the last few years have been really crazy. And yeah, there’s been a lot of turbulence,” said Vincent, 25, of Mississauga, Ont.

“To finish off the story like that with a bronze medal today, I’m just so happy and proud of Laurence and myself for persevering through all of that and still being able to perform here in Tokyo.”

Canada’s six gold, six silver and 11 bronze medals put the country 14th on the medal table, behind Hungary and ahead of South Korea. Canada was 11th in total medals, three ahead of New Zealand, but nine back of France.

China led the medal standings with 38 gold, though that was only two more than the United States. The Americans continued their domination of the overall medal ranking with 108. China was next at 87.

Jamaican anchor runner Candice McLeod needed to go all out to catch Watson down the stretch.

Earlier, appearing in her second Olympics — but her first in 17 years — Malindi Elmore withstood the intense heat and humidity to finish ninth in the women’s marathon.

She went on to become one of Canada’s premier Ironman triathletes, and ran her first marathon just two years ago.

The 41-year-old from Kelowna, B.C., demonstrated that iron will on Saturday, picking off eight runners over the second half of the race to finish in two hours 30 minutes 59 seconds.

“Patience is power,” said Elmore. “The longer I could be patient, the better I would do.”

The marathons and race walk events were held in Sapporo, roughly 800 kilometres north of Tokyo, in hopes of more favourable weather, but the smothering heat and humidity were still a huge factor.

The temperature was 27 C with 75 per cent humidity when the runners pushed off the start line at 6 a.m. local time, and had climbed to 30 C by the finish.

Weather was also a major factor on the golf course, where competitors teed off as early as 6:30 a.m. local time in an effort to avoid approaching thunderstorms.

Rain started to fall just as Canadians Brooke Henderson and Alena Sharp finished their rounds, and play was suspended briefly.

Henderson shot a 4-under 67 in the final round — her best score at the Summer Games — and finished in a tie for 29th.

Although it was a disappointing result for the eighth-ranked women’s player in the world, Henderson said she learned a lot about mental toughness over her four rounds at Kasumigaseki Country Club.

“It would have been easy for me to, once I was out of medal contention, just to give up. But we said, ‘Let’s just fight for every shot and try to make a climb here,”‘ said Henderson, the 23-year-old from Smiths Falls, Ont.

Sharp, who struggled to a 4-over 75 in the final round to finish in 49th place, said she felt “worn out” from a hectic playing and travel schedule.

She and her wife/caddy Sarah Bowman planned to take five weeks off to recover following the closing ceremony.

At the Izu Velodrome, a showdown between two Canadian track cyclists in a semifinal meant one teammate would move on while the other was sent packing.

Kelsey Mitchell from Sherwood Park, Alta., got the better of Lauriane Genest of Levis, Que., to advance to the semifinal of the track cycling women’s sprint.

In the all-Canadian best-of-three quarterfinal, Mitchell beat Genest by margins of .041 seconds and .058 seconds to set up a showdown with 2020 world champion Emma Hinze of Germany.

“Unfortunately I had to race against my teammate, who I train with every single day,” said Mitchell. “We joked about saving our match sprint for the Olympics, it was preferably in the final, but unfortunately we had to do it in quarters.

On the men’s side, Hugo Barrette and Nick Wammes were eliminated from the men’s keirin after failing to qualify for the quarterfinal. Barrette fell in his first-round heat before finishing fourth in repechage.

In the madison, an automatic medal event with no qualifying rounds, the Canadian duo of Michael Foley and Derek Gee did not finish the race.

Earlier at the Tokyo Aquatics Centre, 18-year-old Nathan Zsombor-Murray failed to advance to the final of the men’s 10-metre platform.

The diver from Pointe-Claire, Que., finished in 13th place in the semifinal, 2.55 points away from the last qualifying spot.

“I’m certainly disappointed, but I think I’m even more motivated for Paris and the next three years,” he said.

“Finishing 13th in the world at 18, I certainly have a few years ahead of me to get stronger physically and mentally.”

Also in the pool, the Canadian women’s artistic swimming team came in sixth in the free routine, 12.0654 points behind the gold-medal winners from the Russian Olympic Committee.

This report by The Canadian Press was first published Aug. 7, 2021.